Of fear psychosis and a citizens’ count

Assam is on edge as the final NRC will be published today. 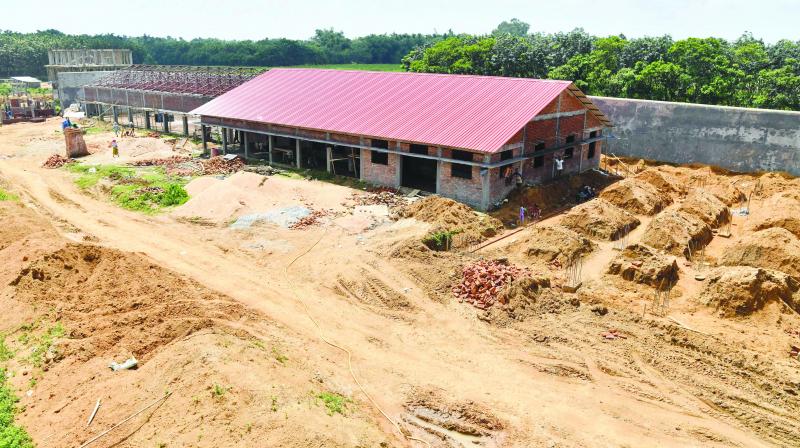 This is a new detention centre being built for people who are not included in a “citizens register” in Kadamtola Gopalpur village, in Goalpara district, some 170km from Guwahati. (Photo: AFP)

NRC has wreaked havoc. While a few ended their lives fearing exclusion from the final draft, some could not get married as their names were missing from the draft.

Bogged down by the growing public perception that Islamic institutions have been acting as patrons to unwanted elements including illegal immigrants from Bangladesh, a prominent madrasa of southern Assam’s Barak Valley — the Darul Uloom Banskandi Madrasa — has made it mandatory for students to submit documentary evidence that either the families have been living in India before 1971 or that their names exist in the National Register of Citizens.

This is not the only instance where the NRC has been made a barrier.

A family in Silchar called off the wedding of their daughter when the groom failed to provide his citizenship credentials. Mr Dilwar Hussain Laskar of Nayagram village near Silchar was in love with a local girl and the two families had agreed to their marriage. Trouble arose when the girl’s family wanted to know from his family whether his name was in the NRC. Mr Dilwar’s name was not in the draft NRC. He was among the 40 lakh people whose name was omitted from the draft NRC which was published in July 2018. Mr Dilwar’s family claimed that the names of all his family members were in the NRC and were hopeful that his name would be included in the final NRC to be published on August 31.

On August 31, Assam will release the final NRC, a list of Indian citizens living in the state. It is said to be the largest citizenship screening drive in the world, it has put lakhs of people on edge.

There have been dozens of individuals who could not face the humiliation of being called Bangladeshi and allegedly committed suicide since the NRC updating process began.

Saying that the 121-year-old madrasa of Barak Valley was forced to take this decision to prove its loyalty to the nation, a resident of southern Assam, Mr Abdul Hanan, said that they were worried about the post-NRC situation as people instead of relying on age-old bonding and relationships would now judge each other on the basis of whether their names were in the NRC.

Pointing out about the fear-psychosis created among the residents, Mr Hanan, a resident of Barak Valley, said that NRC had “certainly damaged” the communal harmony of the state.

This was more visible when the Islamic institute in its statement said that it had introduced the stricter admission rules as “some sections of society” viewed madrasas as safe havens of the immigrants, Islamic fundamentalists and jihadi elements.

To be counted as an Indian citizen in Assam, an applicant must prove that they or their ancestors lived in the state before the midnight of March 24, 1971, a date that corresponds to the beginning of the Bangladesh Liberation War.

For inclusion of their names in the NRC an applicant can submit a host of documents. On compilation of six crucial documents it was found that around two lakh people out of one crore submitted forged papers. In July last year, 40,07,707 names of people were excluded from the complete draft of NRC, which contained 2,89,83,677 eligible persons out of a total 3,29,91,384 applicants. An additional 1,02,462 names were added in the list of excluded persons in June this year taking the total ineligible persons to 41,10,169 in the complete draft.

BJP wants to keep issue alive: Oppn
The National Register of Citizens (NRC) was considered to be an exercise that may have brought an end to the four-decade-old politics of foreigners in Assam, but just before its final publication most political parties in the state, including the ruling BJP, have started questioning its credibility, saying that it may not be error-free.

State BJP leaders said the government might adopt legislative measures to correct the “anomalies” in the final NRC after it is published. While no specific measures were spelt out, it is speculated the Centre may pass the contentious Citizenship (Amendment) Bill 2016 in Parliament.

The All Assam Students Union (AASU), which spearheaded the 1979-1985 Assam agitation against foreigners and sacrificed 855 lives, which culminated in the signing of the Assam Accord, also accused the BJP of pushing its political agenda instead of seeking the greater good of the Assamese people.

“Earlier, the BJP used to accuse the Congress of appeasing Muslims for votebank politics. Now they are doing the same thing with Hindus. We should respect the NRC process, which is being monitored by the SC, but instead of a permanent solution, the BJP wants to keep the foreigners’ issue alive,” said AASU general secretary Lurinjyoti Gogoi.

NRC in a nutshell
For the last four years, residents of Assam have been scrambling to prove their identity in a court-ordered exercise after decades of campaigns by groups complaining about illegal immigrants from neighbouring Bangladesh.

D-Day today
On Saturday, authorities will release the final citizenship list. A draft last year left off four million people, raising the prospects of protests by people facing an uncertain future when the list  comes out.

Major objection
Critics say the search for illegal immigrants in Assam has been largely directed at Muslims.

Vital requisite
Residents had to produce documents proving that they or their families lived in India before March 24, 1971. Hundreds of thousands of people fled from Bangladesh that year during its India-backed war of Independence from Pakistan.

People’s Argument
Hundreds of thousands of people who were left off the draft list have filed claims arguing that they are Indian.

What happens to those excluded?
Those excluded are presumed to be foreigners unless they can prove otherwise at one of hundreds of tribunals presided over by people who are not judges. They have 120 days to file appeals with the tribunals and can take their case to higher courts. If no appeal is filed, a district magistrate makes a referral to the tribunal to strip them of their citizenship. It’s unclear what will happen to those ultimately branded as foreigners, because India has no treaty with Bangladesh to deport them.

Key events leading up to the citizenship registry
1947: British rule ends and the subcontinent is split between India and Pakistan, with millions of people migrating from one to the other.
1948: Free movement between India and Pakistan is restricted, and India’s constitution formalises this as the cutoff date for citizenship.
1951: India uses a census to compile the first National Register of Citizens in Assam.
1955: The Citizenship Act comes into force, setting rules for Indian citizenship by birth, descent and registration.
1961: Thousands of East Pakistani migrants are forced to leave Assam and return to East Pakistan.
1964: Hindu-Muslim riots in East Pakistan lead to an exodus of Bengali Hindus into India.
1965: A war between India and Pakistan forces more refugees into India through Assam.
1971: With help from the Indian Army, East Pakistan becomes independent Bangladesh, triggering a fresh wave of refugees into India.
1979: A by-election shows conspicuously high voter rolls. Fierce protests lasting six years demand detention, disenfranchisement and deportation of migrants.
1983: More than 2,000 Bengali migrants massacred in Assam by Lalung tribe members objecting to their occupation of land. A law stipulates that people who moved to Assam between 1966 and 1971 would lose voting rights for 10 years. Those who could not prove entry by March 24, 1971, were to be deported.
1985: The student movement ends with the signing of the Assam Accord setting Jan. 1, 1966, as a cutoff date. Subsequent arrivals were to be deleted from electoral rolls.
2003: The Citizenship (Amendment) Act declares anyone born in India between 1950 and 1987 and any child born between 1987 and 2003 to one Indian parent is an Indian citizen.
2013: The Supreme Court orders state authorities to expedite the counting process for updating the NRC.
2015: Under Supreme Court monitoring, state authorities begin counting and verifying citizens.
2016: Bharatiya Janata Party brings legislation to grant citizenship to non-Muslim minorities who migrated illegally from Pakistan, Afghanistan and Bangladesh.
2017: The first draft of the new NRC is published, listing 19 million names out of 32.9 million who applied.
2018: Another draft includes 28.9 million names and excludes more than 4 million people.
2019: The final NRC is set for publication on Aug. 31, 2019.