Shia Waqf Board asserts claim over one-third of disputed site

The Sunni Central Waqf Board has contested the position taken by the Shia Board that later was the owner of the now demolished mosque. 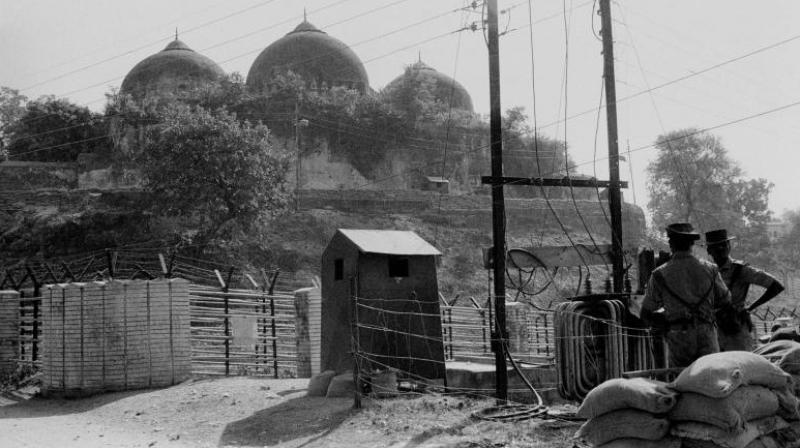 Shia Waqf Board told the five-judge constitution bench headed by Chief Justice Ranjan Gogoi, that the high court by its September 30, 2019, judgment gave one third part of the disputed site to “Muslims” and since they were the actual owner of the mosque they forego their right in favour of Hindus.

Buttressing their claim over the mosque, advocate M.C. Dhingra appearing for Shia Waqf Board said that right from the inception of mosque, it was Shia Mutawalli who was the custodian of the mosque and it continued till mosque structure was attached in 1949.

Mr Dhingra said that the court below in 1944 held that the mosque belonged to Sunnis, primarily on the ground that that the Imam of the Babri masjid was a Sunni. He told the court that Sunni Imam was appointed because mosque was being used both by Shias and Sunnis and during the fasting month of Ramazan, certain Namaza are offered only by the Sunnis and are prohibited in Shias.

The issue whether mosque was owned by Shias or Sunnis, Mr Dhingra said was “still alive as Shia Waqf Board has appealed in the higher court against 1944 order of the Faizabad court.

The Sunni Central Waqf Board has contested the position taken by the Shia Board that later was the owner of the now demolished mosque. Sunni Board will commence its arguments on September 2, 2019 laying claim to entire 2.77 acres of the disputed site on which the demolished Babri Masjid structure once stood.

Arguing for the Hindu Mahasabha, advocate Harishankar Jain said that since it was not in doubt that Babri Masjid was constructed by demolishing the temple and under Hindu law it should be restored for the construction of temple. He said according to the Hindu scriptures, if any land is bestowed in favour of a deity then it can not be taken away even by the king.

Article 13(1) of the Constitution says, “All laws in force in the territory of India immediately before the commencement of this Constitution, in so far they are inconsistent with the provision of this part (fundamental rights), shall, to that extent of such inconsistency, be void.” Telling the court that the question where Lord Rama was born was “redundant” as “I cannot be compelled to prove what can’t be proved”, Harishankar Jain said.

The right to worship of Hindus continued through Islamic rule and British raj under very difficult circumstances only to be limited after the country’s Constitution came into effect, he claimed.

“Where he was born is a redundant issue,” Mr Jain said. “I cannot be compelled to prove what cannot be proved.”

Reaffirming that “once a temple, always a temple” Harishankar Jain said that only Hindu laws should be applied for the resolution of the dispute. He said, “Where Lord Rama was born is a redundant issue,” and “I cannot be compelled to prove what cannot be proved.”

Those who invaded India wanted to establish the rule based on Islam and during those taxing times under Mughals and layer Britishers, Hindus continued to offer worship at the temple, Harishankar Jain said pointing to faith of the people in the Lord Rama’s Janmastahan.

The high court had given the inner courtyard on which the now demolished structure stood and the land underneath the dome to the deity and the Nirmohi Akhara and rest one-third to Sunni Waqf Board.