He united Indians: Modi remembers Sardar Patel on his jayanti

The Prime Minister on Tuesday flagged off a marathon, 'Run for Unity' to mark the birth anniversary of Sardar Vallabhbhai Patel. 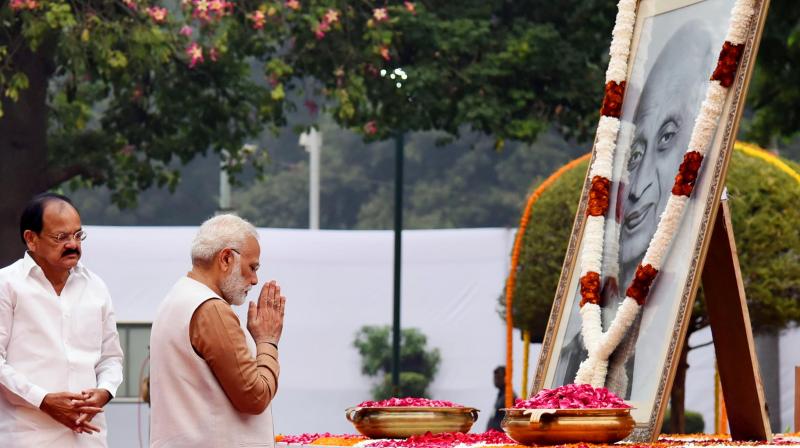 New Delhi: Prime Minister Narendra Modi on Tuesday paid floral tributes to Sardar Vallabhbhai Patel on his birth anniversary and hailed him for his contributions to the building of the nation.

"Sardar Patel not just saved India from the challenges we faced, but he united Indians also. But his name has been sidelined. Whether a government shows acceptance or not, this country will not forget him. We are happy that people are participating in the Run for Unity," Modi said.

“People tried to ensure the contribution of Sardar Patel is forgotten. But the youth of India respects him and his contribution towards the building of our nation,” he added.

Modi also flagged off a marathon, 'Run for Unity', in New Delhi. The 'Run for Unity', which began from the Major Dhyan Chand National Stadium, saw the participation of a large number of people, including sports personalities like Sardar Singh, Deepa Karmakar, Suresh Raina and Karnam Malleswari.

The 1.5 km run in the national capital came to an end near the India Gate C-Hexagon-Shah Jahan Road radial.

Remembering the contributions of Sardar Patel, the Prime Minister, in an early morning address, said the country is proud of him.

"We remember Sardar Patel on his birth anniversary. We are proud of his contribution to India before we attained freedom and during the early years after we became independent," Modi said.

"India is a country full of diversity. Unity in diversity is our speciality," Modi said.

He said India is proud of its diversity. The country is a home to many cultures, languages, lifestyles.

The Prime Minister said he was really happy that the young generation of the country is participating actively in this 'Run for Unity'.

Rajnath Singh, who also addressed the gathering at the event, asked the citizens to work for India's unity.

The central government observes October 31 all over the country as a day of special occasion to foster and reinforce the government's dedication to preserve and strengthen unity, integrity and security of the nation by celebrating it as a 'Rashtriya Ekta Diwas' to commemorate the birth anniversary of Sardar Patel.