No terrorism in India after five years, says Rajnath Singh

Singh was addressing the Dikshant parade, marking the passing out of IPS probationers at the Sardar Vallabhbhai Patel National Police Academy. 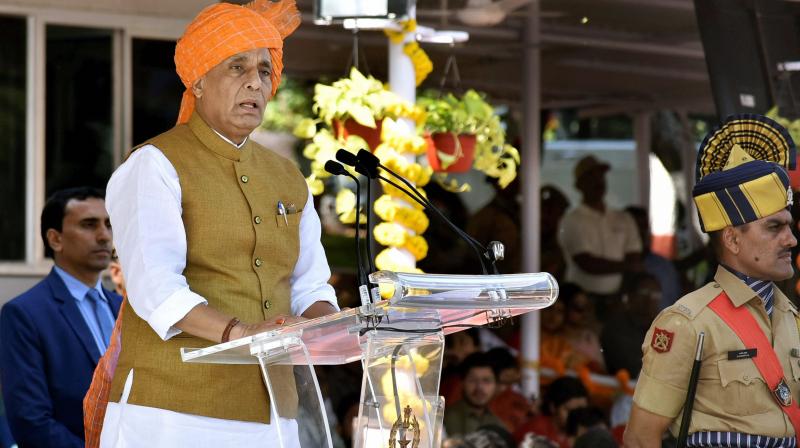 Hyderabad: Union home minister Rajnath Singh on Monday assured that terrorism, extremism and communalism would be eradicated from the country in five years.

“Our government has taken up a crucial decision and its results are seen in Jammu and Kashmir, the northeastern states and those affected by left-wing extremism. Security forces are getting success in these areas,” said Mr Singh.

He added that a package of Rs 25,000 crore for modernisation of police forces to fight cyber terrorism, online radicalization and other threats had been cleared.

Mr Singh was addressing the Dikshant parade, marking the passing out of IPS probationers at the Sardar Vallabhbhai Patel National Police Academy.

“These days, there is unrest and fear across the world.

While at some places the ISIS and Al Qaeda are killing innocents at others there is a threat from nuclear weapons. Cyber attacks and fake news spreading through the internet are another attempt to disturb the economy and spread unrest throughthe false propaganda,” Mr Singh said.

“ISIS and related terrorist groups have succeeded in establishing their network across the world and are adopting new techniques to sustain it and accomplish their task.”