The NCP now leads the council of ministers with a total of 12 Cabinet ministers while the Shiv Sena and Congress have 10 each. 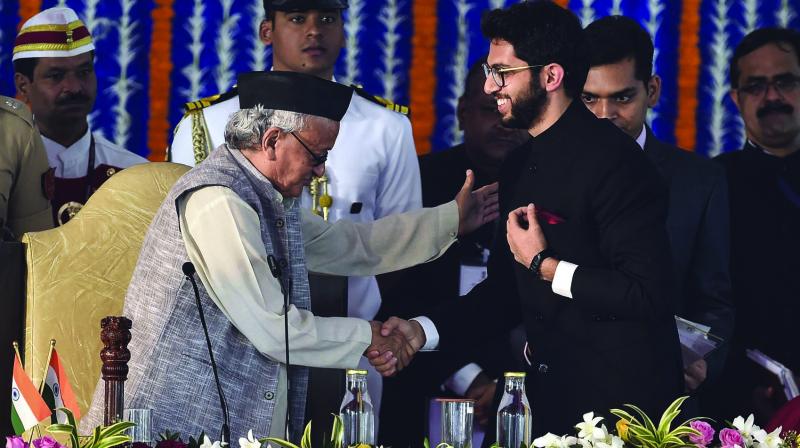 The chief minister and NCP supremo Sharad Pawar were among those present at the swearing-in ceremony.

However, contrary to expectations, the allocations of portfolios did not happen on Monday, with the CM making it clear that it would be done in a day or two. “The Cabinet expansion has been done as per our plans and the allocation of portfolios also be done by tomorrow (Tuesday) or a day after (Wednesday),” he added.

The expansion took place more than a month after the Thackeray-led Maharashtra Vikas Aghadi (MVA) government took over.

In a major move, the Shiv Sena dropped five ministers who were part of the earlier Devendra Fadnavis-led government — Ramdas Kadam, Diwakar Raote, Deepak Kesarkar, Tanaji Sawant and Ravindra Waikar. Instead, it has included new faces such as Anil Parab and Abdul Sattar along with Aaditya Thackeray. The Sena also included allies Shank-arrao Gadakh (Krantikari Shetkari Paksha) as a Cabinet minister, and Rajendra Patil Yadravkar (Independent) and Bacchu Kadu (Prahar Janshakti Party) as ministers of state.

Senior NCP leaders Nawab Malik and Anil Deshmukh, who were ministers in the previous Congress-NCP government, however, found places in the ministry. And former Assembly Speaker Dilip Walse-Patil and former Leader of the Opposition in the Legislative Council Dhananjay Munde were also sworn in.

While senior Congress leaders Ashok Chavan and Vijay Wadettiwar took the oath as Cabinet ministers, senior leader and former chief minister Prithviraj Chavan did not find a place in Uddhav Thackeray’s ministry. There is speculation that he may lead the state Congress unit.

The MVA government was formed on November 28, and Balasaheb Thorat and Nitin Raut of the Congress, Eknath Shinde and Subhash Desai of the Shiv Sena and Jayant Patil and Chhagan Bhujbal of the NCP took the oath of office along with Mr Thackeray on that very day.