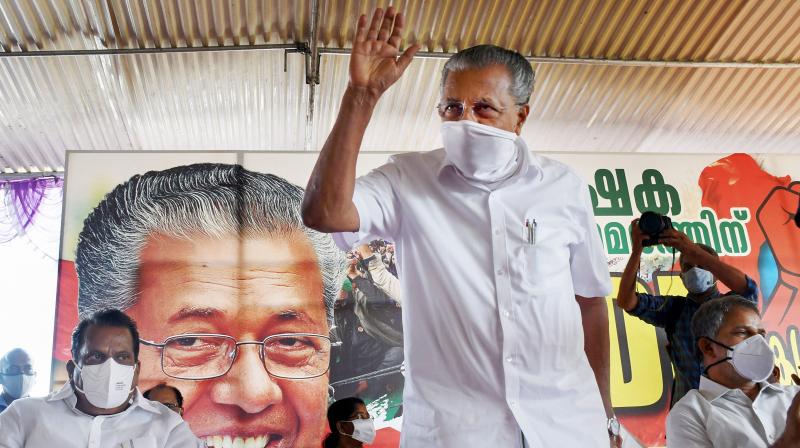 Kerala Chief Minister Pinarayi Vijayan during a protest meet in solidarity with farmers protesting in New Delhi against the Centre's new farm laws in Thiruvananthapuram on Wednesday, December. 23, 2020. (PTI)

Thiruvananthapuram: Kerala Chief Minister Pinarayi Vijayan on Thursday moved a resolution in the state Assembly and attacked the BJP-led NDA government at the Centre over the three contentious central farm laws against which farmers are agitating in Delhi.

The resolution was moved in a one-hour special session convened solely to discuss the farmers' issue and express solidarity with them.

While moving the resolution demanding the immediate scrapping of the new laws, VIjayan said the country was now witnessing one of the most iconic protests ever by farmers in its history.

The central farm laws, passed in Parliament, were not only "anti-farmer" but also "pro-corporate", he alleged and said that at least 32 farmers had lost their lives in the last 35 days of the agitation.

"Legislative assemblies have the moral responsibility to take a serious view when people have anxieties about certain laws which affect their lives," he said, adding that agriculture was part of the culture of the country.

The Centre had come up with the contentious laws at a time when the agriculture sector was facing still challenges, he said, adding as a result of which the farmers were anxious they would lose even the present support price.