Thousands of mentally ill people chained in sheds in UP

At present, more than 12,800 people are still shackled-to beds, cement blocks, or in animal pens. 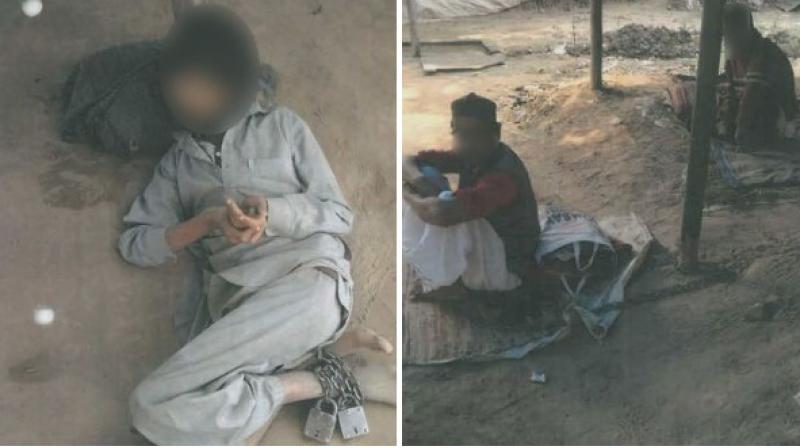 According to Article 21, every person with mental illness shall not only have a right to live with dignity but shall be protected from cruel, inhuman or degrading treatment. (Photo: ANI)

New Delhi: People with psychological disorders shackled like cattle, their feet tied with iron chains and padlocked for days, months and years - this is the sight at a dirty shed in Uttar Pradesh's Badaun where men and women, young and old, suffering from mental illnesses are kept and abused.

The heart-wrenching incident came to light after a lawyer, a resident of South Delhi filed a petition in the Supreme Court seeking the enforcement and protection of civil, political and fundamental rights of an underprivileged and deprived section of society.

Advocate Gaurav Kumar Bansal believes that "chaining and restraining, confining of persons with mental illness in Faith-Based Mental Asylum shows that there is a huge gap in providing mental health and treatment to the needy in our country."

"It is a matter of serious concern and is against the provision of rights of a person under Article 21 of the Constitution. The dignity of such persons can't be compromised," said the bench.

According to Article 21, every person with mental illness shall not only have a right to live with dignity but shall be protected from cruel, inhuman or degrading treatment.

In India, the World Health Organisation estimates 2,443 disability-adjusted life years (DALYs) per 100,000 population are lost a year, while the age-adjusted suicide rate per 100,000 population is 21.1. The economic loss due to mental health conditions in India has been pegged at 1.03 trillion of 2019 US dollars for the period 2012-2030.

Mental health workforce in India (per 100,000 population) include psychiatrists (0.3), nurses (0.12), psychologists (0.07) and social workers (0.07). On a closer look, along with India, another country-Indonesia too is struggling to end human shackling.

In 2016, Human Rights Watch exposed shackling of as many as 18,000 psychosocially disable people. The administration has taken a vow to curb such menace by raising awareness and providing medical health services to the needy. However, at present, more than 12,800 people are still shackled-to beds, cement blocks, or in animal pens.