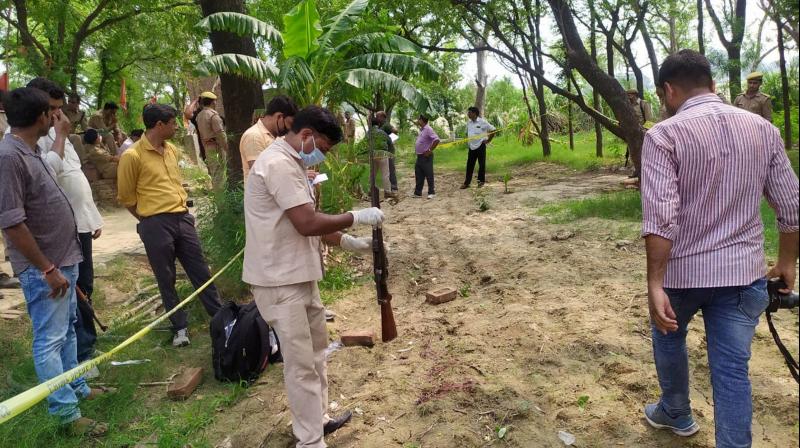 Police and forensic team investigate the site of encounter in Kanpur. PTI photo

Lucknow: At least eight Uttar Pradesh police personnel, including a deputy superintendent of police, were killed in an encounter with criminals in Kanpur, officials said on Friday.

The encounter took place when the police team was approaching to arrest Vikas Dubey, a history sheeter facing 60 criminal cases, in Dikru village under Chaubeypur police station on the intervening night of Thursday and Friday, police said.

As the police team was about to reach the hideout of the dreaded criminal, a hail of bullets was showered on them from a building rooftop, leaving Deputy SP Devendra Mishra, three sub-inspectors and four constables dead, officials said.

Giving details of the incident, Uttar Pradesh Director General of Police H C Awasthi said the notorious criminal might have got an inkling of the impending raid.

He and his henchmen put up massive roadblocks to prevent the police personnel from proceeding towards their hideout. As the police team was caught unawares, the criminals fried at them from a building rooftop leading to the deaths, Awasthi said.

On getting information about the incident, additional DG (Law and Order), IG (Kanpur) and the senior SP of Kanpur rushed to the spot, where a forensic team has started investigations. The forensic team will be joined by another team from Lucknow.

The Special Task Force (STF) of the Uttar Pradesh police has also been pressed into action, the DGP said.

Chief Minister Yogi Adityanath paid tributes to the slain policemen and conveyed his heartfelt condolences to their family members.

According to a spokesperson, he directed the police chief to take stringent action against the culprits and collect detailed report from the spot immediately.

Opposition hits back at Yogi government

Opposition parties in Uttar Pradesh, including the Congress and Samajwadi Party, lashed out at the Yogi Adityanath government over the killing of eight policemen, saying no one was safe in the state.

"Eight policemen were martyred while they went to nab criminals. I pay my condolence to the family of the martyrs. In UP, law and order has become very bad and criminals have no fear. From common man to policemen, no one is safe," she said.

"The responsibility of law and order is with the chief minister. He should initiate strict action and there should be no laxity in it," she added.

Her brother and former Congress president Rahul Gandhi, too, attacked the Yogi government over the killings. He tweeted: "Another proof of 'Gundaraj' in UP. When the police are not safe, how will the public be? My heartfelt condolences are with the families of the slain martyrs and I wish the injured a speedy recovery," he said in a tweet in Hindi.

Gandhi also expressed his condolence to the family of those dead and wished speedy recovery of the injured.

" In 'rogi sarkar' 'jungleraj', UP has become 'hatya pradesh', where in Kanpur criminals patronised by those in power attacked policemen killing eight of them," Samajwadi Party said in a tweet.

While condoling the deaths, the SP has demanded an "immediate announcement of Rs 1 crore each for the martyred policemen's family".

It also demanded that the alleged "connection (of criminals) with those in power should be exposed".