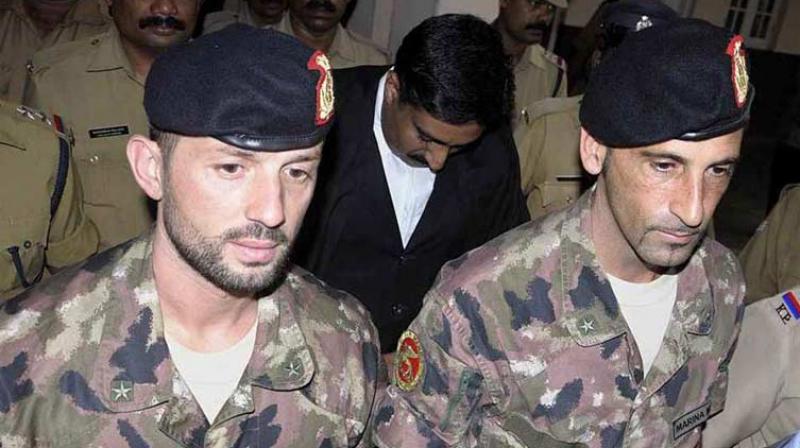 New Delhi: More than eight years after two Italian marines on board a ship had allegedly fired at and killed two Indian fishermen off the coast of Kerala on February 15, 2012, an international Arbitral Tribunal has held that the actions of the Italian military officers and their country Italy breached India’s freedom of navigation under international laws.

However, the Tribunal ruled that Indian courts cannot judge the marines as they enjoy immunity as State officials. The Tribunal decided that India is entitled to payment of compensation in connection with the victims’ loss of life, physical harm and material damage to property and rejected Italy’s claim to compensation for the detention of the Marines. In its reaction, India said it “has taken note of the Award and will be in touch with relevant entities on the matter”.

The Tribunal also held that the Parties to the case can consult with each other to reach an agreement on the amount of compensation due to India and also noted the “commitment expressed by Italy to resume its criminal investigation into the events of 15 February 2012”. The Arbitral Tribunal had been constituted under UN Convention on the Law of the Sea (UNCLOS) on June 26, 2015.

The two Italian marines--Latorre Massimiliano and Salvatore Girone -- on board a ship named Enrica Lexie, had been arrested by Indian authorities for allegedly killing two Indian fishermen off the coast of Kerala in 2012.

Italy had claimed the ship was in international waters and that only the International Tribunal for the Law of the Sea (ITLOS) should apply following which moved the international tribunal. According to news agency reports of the time, while Latorre returned to Italy in September 2014 following an order of the Supreme Court issued on health grounds, Girone was allowed to go back to Italy in May, 2016.

In a statement, the MEA said, “The Arbitral Tribunal constituted under Annex VII of the UN Convention on the Law of the Sea (UNCLOS) on 26 June 2015 on the request of Italy in respect of a dispute concerning the incident of 15 February 2012 involving Italian tanker “Enrica Lexie” and Indian fishing vessel “St. Antony” has transmitted its award. ... The Tribunal upheld the conduct of the Indian authorities with respect to the incident under the provisions of the UNCLOS. It held that the actions of the Italian military officers and, consequently, Italy breached India’s freedom of navigation under UNCLOS Article 87(1)(a) and 90.”

The MEA added, “The Tribunal observed that India and Italy had concurrent jurisdiction over the incident and a valid legal basis to institute criminal proceedings against the Marines. The Tribunal rejected Italy’s claim to compensation for the detention of the Marines. However, it found that the immunities enjoyed by the Marines as State officials operate as an exception to the jurisdiction of the Indian courts and, hence, preclude them to judge the Marines.”

New Delhi further said, “The Tribunal decided that India is entitled to payment of compensation in connection with loss of life, physical harm, material damage to property and moral harm suffered by the captain and other crew members of “St. Antony".

India-Italy diplomatic ties had taken a severe hit after that incident in 2012. But three years ago, both nations had decided that ties would not be held hostage to this tragic episode.