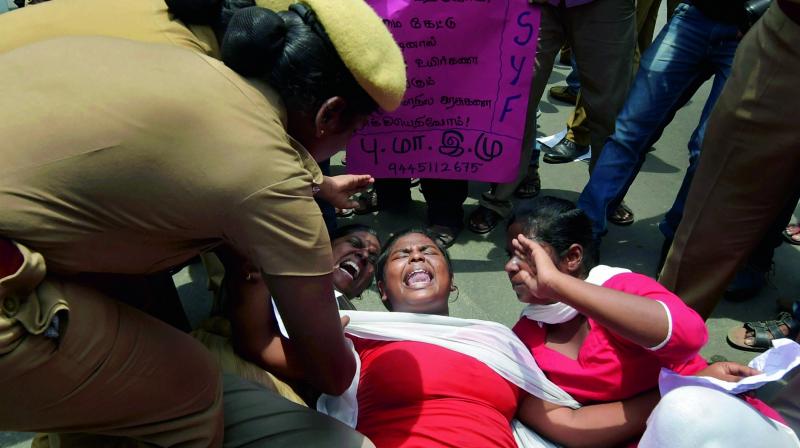 Police detains members of the Radical Students’ Youth Front (RSYF) during a protest over the suicide of a 17-year-old girl who had moved the Supreme Court against Neet-based medical examinations, in Chennai on Saturday. (Photo: PTI)

A total of 1,450 persons were arrested throughout the state, according to the police. Besides, about 3,000 protesters were let off after detention for a few hours. In Chennai city, protests were held at 17 places resulting in the arrest of 735 persons including 100 women.

As Anitha’s death gave new life to the anti-Neet agitations, which turned into vociferous protests against the central and state governments, BJP offices throughout the state came under heavy security blanket, in a clear indication of the strong resentment against the saffron party, which is accused of forcing Neet on Tamil Nadu.

Tamil Nadu appears to be heading towards another round of protests and political activities on Neet since the mainstream parties declared that they would decide on the kind of coordinated protests to scrap Neet.

Viduthalai Chiruthaigal Katchi leader Thol. Thirumavalavan said  parties including DMK, Congress, Left, VCK and other outfits said they would chalk out plans for the protest to demand that education should be removed from the concurrent list and placed in the state list alone.

All the major avenues where students and youth gathered for the jallikattu protests including Marina beach, VOC ground in Coimbatore and similar places in all the districts are heavily guarded by police to prevent similar protests against Neet.

Naam Thamizhar movement leader P. Seeman held protests in Nungambakkam demanding justice for Anitha’s death. Talking to the media, he questioned the need for NEET and asked “Before NEET was introduced, the country had produced thousands of doctors. Are all them are unqualified to be doctors?”.Dravidar Viduthalai Kazhagam cadre who tried to march towards ‘Kamalalayam’, the BJP headquarters in the city were stopped and arrested by police.

In Coimbatore, VCK cadres were arrested when they tried to enter the railway station, while police had to resort to mild lathi charge when Thanthai Periyar Dravidar Kazhagam activities blocked roads in the city. Candle light processions were taken out for Anitha at Tirunelveli and police barricaded the Palayamkottai VOC ground to thwart attempts of protesters to gather for the protests.