Khan is booked under sections 8(C) read with 20, 35 and 27 of the Narcotic Drugs and Psychotropic Substances Act 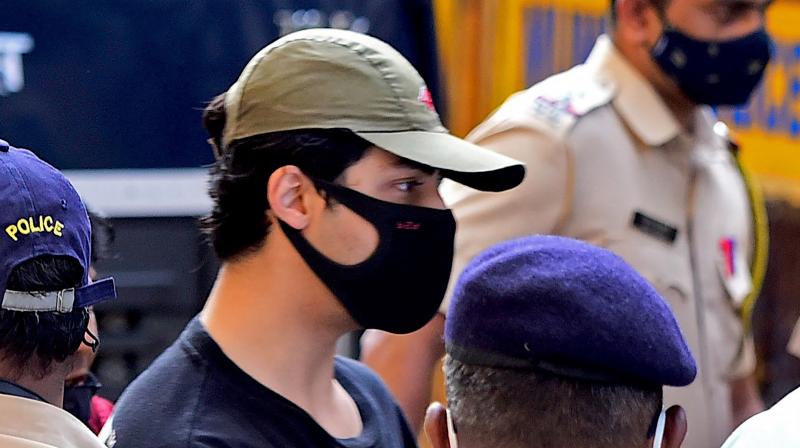 Bollywood actor Shah Rukh Khan's son Aryan Khan is being escorted by law enforcement officials outside the Narcotics Control Bureau (NCB) office after he was allegedly brought in for questioning along with others following a raid at a party on a cruise ship, in Mumbai on October 3, 2021. (AFP)

Mumbai: A holiday court in Mumbai on Sunday remanded Aryan Khan, 23, son of Bollywood superstar Shah Rukh Khan, and two others to the one-day custody of the Narcotics Control Bureau (NCB) in a drugs case. Aryan was taken into custody during a raid on a cruise ship off the Mumbai coast. The probe agency took the suspects into custody as illegal drugs were recovered from the party held on the ship. NCB sleuths were present on the ship disguised as passengers.

Along with Khan, the NCB had also taken two others -- Arbaaz Merchant, 26, and Munmun Dhamecha, 39 -- into custody and both have also been remanded to NCB custody till Monday.

Aryan appeared tense when he was brought to the court. The lawyers were allowed to speak to the accused before the court proceedings, and after speaking to his lawyer Aryan seemed a bit relaxed.

Special public prosecutor Advait Sethna argued that the anti-drug agency suspects the involvement of a drug syndicate in this matter and in order to investigate this, the agency needed the custody of the accused for two days. He also argued if the accused are not remanded to police custody, it would become difficult for the NCB sleuths to reach other accused.

The NCB also claimed that WhatsApp chats clearly show the nexus of Aryan, Arbaz and Munmun with suppliers and peddlers on a regular basis. On the other hand, Aryan Khan’s lawyer Satish Maneshinde opposed the request for his custody and contended that the sections imposed on his client were bailable. He had also argued that the NCB sleuths didn’t find any drugs from Aryan’s possession and no contraband was found when his bag was checked.

It was also argued in the court that Aryan was called on the ship as a special guest, being the son of Bollywood star Shah Rukh Khan, and he was nowhere involved in any illegal act.

Advocate Maneshinde, however, said that if custody was necessary, one day’s custody was sufficient. “Your honour may take me in custody and remand me for one day so that whatever investigation needs to be done, is done. Because I am neither found in possession, nor is there allegation of consumption. None of the sections attract the embargo under Section 37 of the NDPS Act,” argued Mr Maneshinde.

He submitted that he will tender a bail application on Monday before the regular court. The lawyers for the other two also conceded one-day NCB custody.

Aryan Khan is booked under Sections 8(C), read with Sections 20, 35 and 27, of the Narcotic Drugs and Psychotropic Substances Act.

After hearing the arguments, additional chief metropolitan magistrate R.K. Rajebhosale observed that even though the charges imposed on the case were bailable, the allegations against the accused were serious in nature and remanded the trio to NCB custody till October 4.

Aryan and the other two persons would have had to spend their night in jail with hardened criminals had they been remanded to judicial custody, because they were produced before the court for remand in the evening and being a holiday court, the magistrate would have not heard their bail applications because of the paucity of time. Now being in police remand, the trio will spend their night in the office of the NCB.

The Mumbai NCB officials conducted a raid on the Cordelia cruise ship on getting specific information about presence of banned drugs on the ship as it was on the way from Mumbai to Goa on October 2, 2021. The reports said around 20 NCB officials booked tickets and boarded the cruise ship disguised as passengers. They waited till the time those on board allegedly started using narcotics and caught them red-handed. The ship’s captain was then asked to take the cruise back to the international cruise terminal at Ballard Pier in south Mumbai. Those held were taken to the NCB office nearby.

According to sources, some passengers got special pockets sewn to their clothes to allegedly evade security checks and smuggle the drugs aboard. One of those held allegedly hid the drugs in the heel of his shoe, a source said.

The police had taken five more persons into their custody from the ship and they were placed under arrest on Sunday. They would be produced before the court for remand on Monday.