In a series of tweets, Priyanka Gandhi listed some of the demands and questions of the victim's family 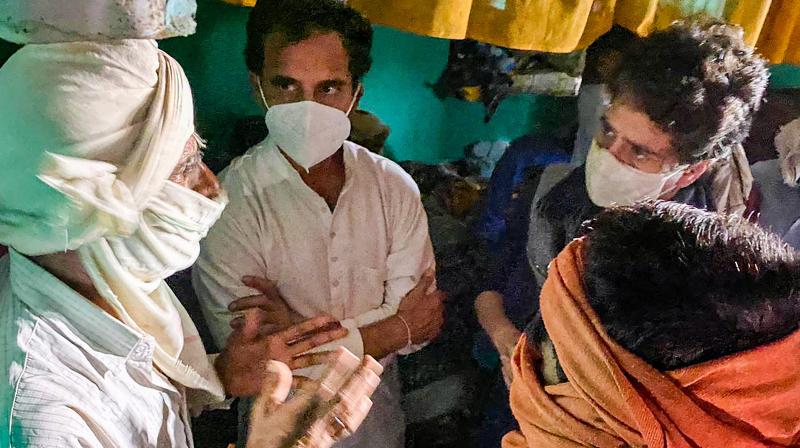 Congress leaders Priyanka Gandhi Vadra and Rahul Gandhi meet the family members of a 19-year-old Dalit woman who died after being allegedly raped two weeks ago, at Bulgadi village in Hathras. — PTI photo

After meeting the Hathras victim's family, Congress leader Priyanka Gandhi Vadra Saturday listed their demands which included a judicial inquiry through the Supreme Court and suspension of the district magistrate.

Congress leaders Rahul Gandhi and Priyanka Gandhi met the family and declared that they will fight for ensuring justice to the Dalit woman who died after being allegedly gang-raped.

In a series of tweets, Priyanka Gandhi listed some of the demands and questions of the victim's family.

"Questions of Hathras victim's family -- 1. A judicial probe be conducted through the Supreme Court. 2. Hathras DM be suspended and not given a big post. Why our daughter's body was burnt using petrol without our permission.

"4. Why we are being repeatedly misled and threatened. 5. For humanity's sake, we brought 'chita se phool', but how do we believe that this dead body is that of our daughter?" Priyanka Gandhi tweeted in Hindi. In Hindu tradition bringing 'chita se phool' generally means collecting remains after cremation.

It is the right of this family to get answers to these questions and the UP government will have to give answers, the Congress general secretary in-charge UP said.

After meeting the victim's family, Rahul Gandhi tweeted, "I met the Hathras victim's family and understood their pain. I assured them that we are standing with them in this difficult time and will provide all help in getting justice for them."

"The UP government will not be able to act in an arbitrary way as the whole country is standing for ensuring justice to the daughter of the country," he said in the tweet in Hindi.

While heading to Hathras, high drama unfolded in the national capital. There was heavy police deployment on the Delhi-Uttar Pradesh border with barricades on Delhi-Noida Direct (DND) flyway and scores of policemen deployed.

As swarms of Congress workers and others jostled with each other amid loud honking, slogans and Congress flags fluttering in the air, the Gautam Buddh Nagar Police finally allowed five people, including Rahul Gandhi and Priyanka Gandhi, to go to Hathras.

Congress workers -- some who described what happened as "brutal repression" -- claimed police used batons to disperse the crowd.

A video also did the rounds on social media in which Priyanka Gandhi was seen coming to the rescue of party workers coming in between them and baton-armed police.

Several Congress leaders also slammed the UP government for showing disrespect to a woman and they tagged a photograph in which a policeman is purportedly seen grabbing Priyanka Gandhi's kurta.

There were also some posts on social media hitting out at the Congress over a video in which people were purportedly heard laughing in the car as Priyanka Gandhi drove a silver Innova with Rahul Gandhi by her side and some people on the back seat.

While several Congress MPs such as Shashi Tharoor, P L Punia, Partap Singh Bajwa, Deepender Hooda, as well as leaders like Jitin Prasada and Sushmita Dev reached the DND flyway, only a few proceeded beyond the border.

Earlier in the day, Priyanka Gandhi Vadra alleged that the Yogi Adityanath government was threatening the family of the Hathras victim and asserted that such behaviour was not acceptable to the country.

She said the UP government is "morally corrupt".

"The victim did not get treatment, her complaint was not registered on time, her body was forcibly cremated, the family is in captivity, they are being suppressed -- now they are being threatened that they will have to undergo a narco test," she said in a tweet in Hindi.

"This behaviour is not acceptable to the country. Stop threatening the victim's family," she said.

On Thursday, Rahul Gandhi, Priyanka Gandhi along with several party leaders and workers were detained by the police and sent back to Delhi, after they tried to reach Hathras to meet the family of the Dalit woman.

In a tweet in Hindi in the morning using the hashtag 'Hathrashorror', Rahul Gandhi said the behaviour of the UP government and police with the woman and her family "is unacceptable to me. No Indian should accept this."

He asserted that "no power in the world can stop me from meeting this grieving family in Hathras and share their pain".

The 19-year-old Dalit woman was allegedly raped at a village in Hathras by four men on September 14. After her condition deteriorated, she was referred to the Delhi's Safdarjung hospital where she breathed her last on Tuesday.

She was cremated in the early hours of Wednesday, with her family alleging the local police forced them to conduct the last rites in the dead of the night.

Local police officers, however, had said the cremation was carried out "as per the wishes of the family".