The main accused in the case is still at large. 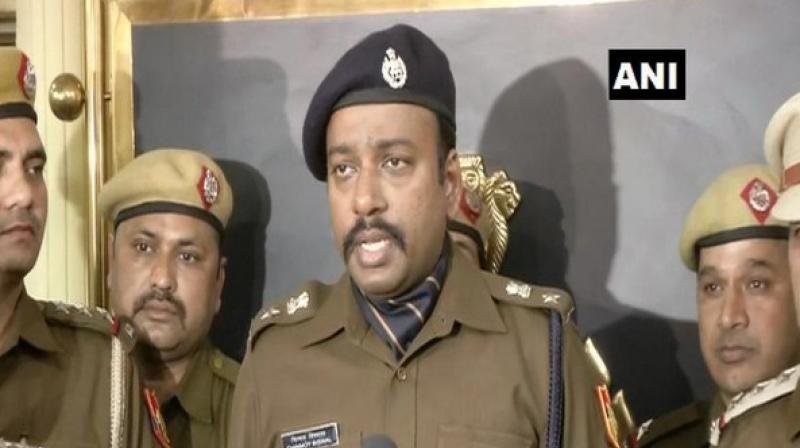 Police said that the victim was strangled to death as there was mark on her neck. (Photo: ANI)

New Delhi: The Delhi Police have arrested four people on Monday and claims to have solved the murder mystery of 25-year-old girl whose body was found in a sack dumped in Sarita Vihar on February 27.

The main accused in the case is still at large.

The arrested accused have been identified as Saurabh (19), Dinesh (25), Rahim (25) and Chanderkesh (30), all are the residents of Delhi’s Sangam Vihar area while the hunt is on to nab the main accused  Dhirender.

Along with murder and other relevant IPC charges, the accused have been slapped with gangrape charges.

Police said that the victim was strangled to death as there was mark on her neck.

Police said that the letter found near the victim's body held three men responsible for her murder but police didn't find any connection between the girl and those men. The police also informed that a mobile phone was also found near the body.

"It was a conspiracy by accused Dinesh and Dhirender to frame the men mentioned in the letter due to a personal enmity. The deceased was a friend of Dinesh female friend. They called her on pretext of job, made her write that letter, and murdered her," said DCP (south-east) Chinmoy Biswal.

"Dinesh and Dhirender were in Tihar jail and had an enmity with inmate Bunty. After being released from the jail, they made a plan to frame Bunty's brother Aarush in a murder case with an intention to take revenge and acquire his land. Accused have confessed of gang-rape. Dhirender is absconding," said Biswal.

He said the accused strangled her to death on Tuesday morning and also used the woman’s phone to call Aarush a few times to frame him for her murder.