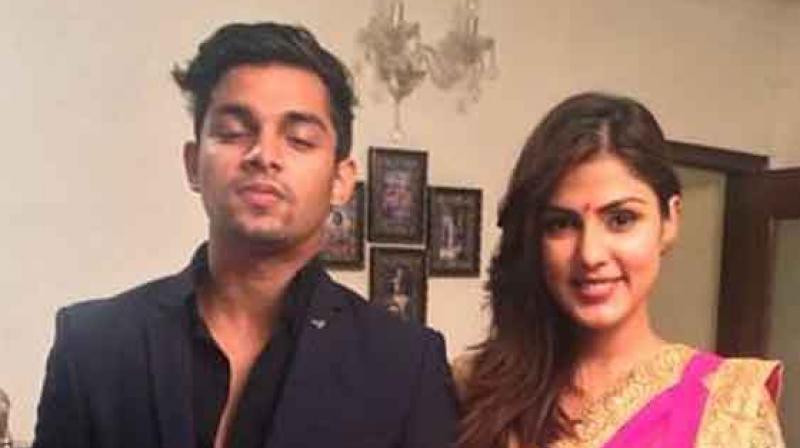 Showik Chakraborty with his sister Rhea

Various angles surrounding the death of the 34-year-old actor are being probed by three federal agencies, the Enforcement Directorate (ED) and the Central Bureau of Investigation (CBI) being the other two.

Showik Chakraborty, brother of main accused in the case Rhea Chakraborty, and Rajput's house manager Samuel Miranda have been placed under arrest under various sections of the Narcotic Drugs and Psychotropic Substances (NDPS) Act, a senior NCB officer said.

Both Showik and Miranda have been named as accused by the ED and the CBI in the FIRs registered by them in Rajput's death case.

The sections pressed against them, he said, are 20(b) that deals with production, manufacture, possession, selling, purchase and transport of cannabis, 28 (punishment for attempt to commit offences), 29 (punishment for abetment and criminal conspiracy) and 27(a) that defines punishment for financing illicit traffic and harbouring offenders.

They will be produced before a local court on Saturday.

The two are required to be put under custodial interrogation to unravel more details about the procurement, transportation and usage of the narcotics. The agency has a "strong case", the officer said.

The arrests came after over 10 hours of questioning of the two, who were brought to the agency's office in Ballard Estate area here by the NCB sleuths after their premises were raided early morning.

Accompanied by police officials, the NCB searched the residence of Showik in Santa Cruz (West) and Miranda's house in suburban Andheri (West) from 6:30 am. Showik lives with sister Rhea.

The search teams included women officials and they were seen wearing masks and gloves and using multiple vehicles.

NCB Deputy Director (operations) KPS Malhotra, who is heading the probe team of the agency, was seen leading the search and he told media persons on the ground that the houses of Showik and Miranda were being searched which was a "procedural" action.

During the searches, both were handed over the summons brought out under section 67 (power to call for information) of the NDPS Act to join the investigation, the officials said.

"They intended to go along (with the search team) due to media presence," an officer said.

He said the agency is looking to gather additional evidence through this action and some documents have been seized by the search teams.

He said Rhea (28), Rajput's live-in partner, is expected to be summoned soon.

The NCB, till now, has arrested two alleged drug peddlers operating in the capital city of Maharashtra in this case and it has detained one person.

The two arrested are Zaid Vilatra (21) and Abdel Basit Parihar (23) while Kaizan Ibrahim is being questioned since Thursday.

Parihar is learnt to have "links" with the narcotics case registered against Rhea and others.

Parihar is linked to a person who was allegedly reported to be featuring in chats recovered from the mobile phones of Rhea and Showik, officials have said.

The agency is probing the drug angle in this case under criminal sections of the NDPS Act after the ED shared with it a report following the cloning of two mobile phones of Rhea.

The NCB has said it is looking into "the drug citadel in Mumbai, and especially Bollywood" in this case.

According to officials, the mobile phone chats and messages indicated procurement, transportation and consumption of drugs and these leads were shared by the ED with the NCB and the CBI.

The NCB is understood to have obtained the phone records of other accused in the case too.