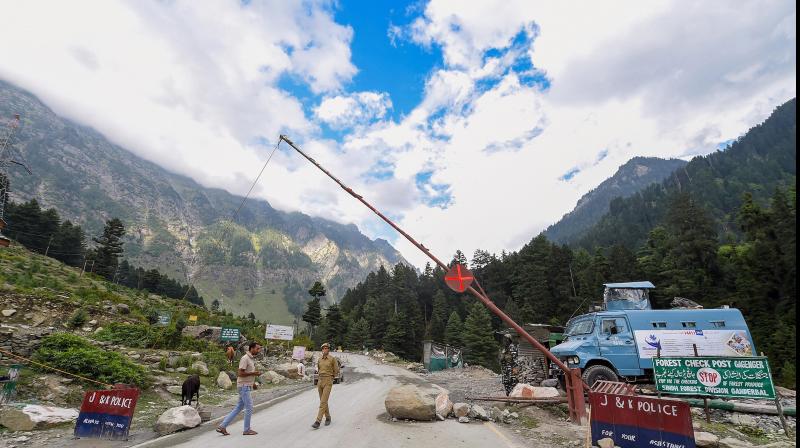 A security personnel stands guard along the Srinagar-Ladakh Highway, at Gagangir in Ganderbal District of Central Kashmir. — PTI photo

Guwahati: Amid escalating border tension with China in eastern Ladakh, a report that five Arunachalee youths serving as porters for the Indian Army allegedly abducted by the Peoples Liberation Army (PLA) of China on Thursday has created tension on the eastern frontier too with Upper Subansiri district administration clarifying that they have not received any complaint or information in this regard as of now on Saturday.

Informing that they have taken note of social media report and asked police to reach out to the frontier areas where the incident is reported to have taken place, the deputy commissioner of Upper Subansiri district Kento Danggen told this newspaper, “We have not received any complaint or even information about such an incident so far. Following the hype created on social media we have asked police to rush officers to the areas where these incidents are reported to have taken place. We are also trying to reach out Indian Army.”

Pointing out that it may be true, the deputy commissioner said that they are in the process of reaching out to the villages and villagers who claimed about these incidents through social media posts, obviously to draw attention.

Though, defence spokesperson in Guwahati said that they have not received any information in this regard from headquarters, security sources in the intelligence wing, engaged in international border management, said that Indian Army headquarters have also been establishing contact with the patrolling teams operating in remote areas of frontier along the MacMohan line to verify the claim of villagers.

Informing that incident came to light after WhatsApp messages went viral in Arunachal Pradesh, senior journalist at Itanagar Jarpum Gamlin told this newspaper that they could talk to the family members who claimed that they came to know about the incident through a wireless message of Indian Army.  It said, “Five persons have been abducted by the Chinese army at the Sera-7 area near McMahon line.”

The message also claimed that the boys were from the Nacho  administrative block and  have been identified as Tanu Bakar, Prasad Ringling, Ngaru Diri, Dongtu Ebiya and Toch Singkam.

“We have received information from our village people that my brother along with four others have been abducted by the  PLA near McMahon Line,” said  Prakash Ringling, the elder brother of Prasad Ringling to the local Itanagar based newspaper Eastern Sentinel.

“My brother was part of 36 people serving as porters  near the China border that took at least 12 days of foot march to reach a place called Sera-7 where the incident took place,” said Prakash  while informing that villagers received a wireless message from Indian security personnel about the incident.

He also urged, “I appeal to the state and central government to take immediate initiative to  bring back   all the five persons safely  including my brother who have been allegedly  abducted by the PLA.”

Earlier, on March 19 this year, a 21-year-old man was abducted by China's People's Liberation Army from the Asapila sector near the McMahon line in Upper Subansiri district.

"The Chinese have again started creating a nuisance. Just like in Ladakh and Doklam, they [Chinese Army] have started incursions in Arunachal Pradesh," he said, claiming it was the second time that the Chinese Army has abducted people from India.