Gurgaon police has released the sketches of the accused and appealed to the public for their identification. 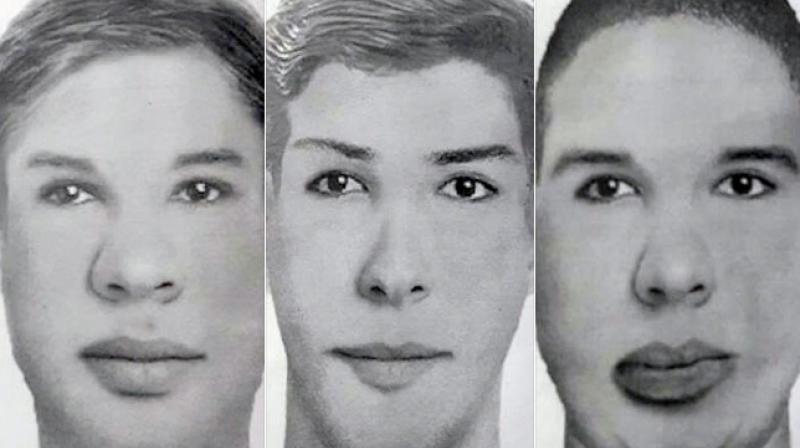 The images of the 3 accused. (Photo: File)

Gurgaon: Nine days after a woman was gangraped and her 9-month-old baby flung to the ground and killed to smother her cries, police in Gurgaon on Wednesday arrested two of the three men allegedly responsible for the double crime.

While Yogendra and Amit were nabbed from their hideouts in Gurgaon, Jaikesh is still on the run, confirmed Gurgaon Police Commissioner Sandeep Khirwar and ACP Manish Sehgal. All three had come to Gurgaon from Bulandshahr in western Uttar Pradesh recently.

As police pieced together the narrative behind the May 29 gangrape and murder in the industrial area of Manesar and admitted to lapses in the investigation, the 23-year-old woman recounted her four-hour horror, a short distance away from the bustling "millennium town" of Gurgaon.

"My child died but I never got to know," she told reporters outside the police station in a chilling matter-of-fact tone.

She was on her way to her parental house at Khandsa village when she was first given a lift in a truck. The truck driver also molested her but dropped her off on the busy NH 8 as she put up strong resistance. That's when the three evidently drunk men spotted her and offered to drop her home.

"When I was waiting, the three men were drinking beer and approached me in a tempo, asking where I was going alone. They started attacking me...  When my child started crying, they tried to smother my baby. And then they threw her on the footpath. I requested them to stop, saying my child is crying. After that they raped me on the road."

Their job done, the men left the woman after raping her for four hours. Not realising that her baby had died, she went back to the spot where they had flung the baby, picked her up and went to a hospital where doctors declared her dead. It was a new day by then.

Unwilling to give up, the young mother picked up her baby, got on to a Delhi Metro with the lifeless body to take her to a hospital in Delhi and later returned to the MG Road Metro Station, on Gurgaon's glittering Mall Mile, where her husband was waiting.

"I did not believe my daughter had died and I travelled with the dead child to a hospital in South Delhi's Hauzrani area and later returned to MG Road metro station with a dead body," she said.

Her story underscoring once again the vulnerability of women in the National Capital Region and the lack of effective police action, the young woman said there was no police patrol in sight through that endless night.

"There may have been some laxity or lapse in adding the charges of rape to the case. We are taking action against the officials. One lady sub inspector has been suspended. It was also found that there was delay in medical and other processes... during investigation," Khirwar admitted.

The police also reportedly did not register an FIR of gangrape initially but later included the charge five days after the incident.

A Special Investigation Team (SIT) was formed and was on the trail of Yogendra's accomplices in the Magic Tempo, a four-wheeled mini auto.  Prima facie, all three accused were involved in the murder of the baby. The post mortem says the death of the baby was caused by smothering and external injury, he said.

The trio had given her a lift and taken her to a secluded spot in Manesar, where they took turns to rape her on the ground, he said.

Yogendra told police that they had been drinking beer and were inebriated when they came upon the young woman - also 23 like another young woman who was picked up on the night of December 16, 2012, from a Delhi bus-stop.

From IMT Manesar chowk, they took her to a service lane at NH-8. "They turned back the Magic Tempo at sector-8 outer road after taking food from Rimjim hotel located opposite the road. They then threw her minor daughter who was crying on a footpath to avoid public attention," the Gurgaon police chief said.

Referring to the woman taking the baby to a hospital, he said, "The hospital administration declared the infant dead but didn't inform the police. We will take legal action against it."

The accused persons and the woman stay on a rented accommodation in Bas Khusla village at Manesar. She had left home after an altercation with her husband and neighbours on the night of May 29.

Gurgaon police has released the sketches of the accused and appealed to the public for their identification.