Ahmed could be seen wearing a battle pouch with a grenade in the footage of Bhat’s funeral which went viral on social media. 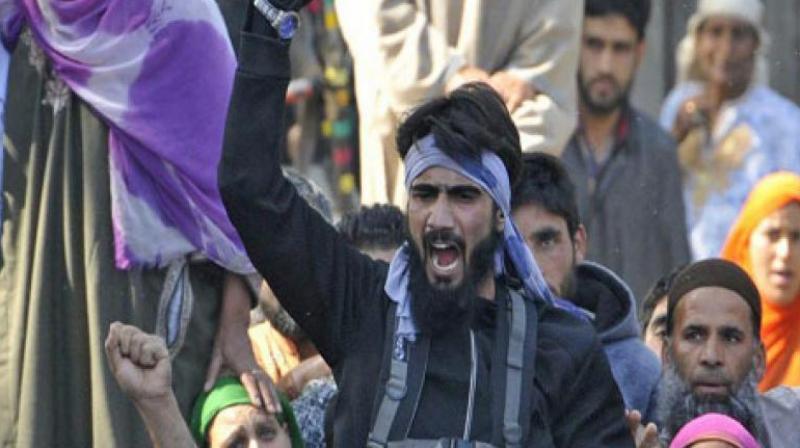 Srinagar: A Hizb-ul-Mujahedin militant who had appeared at the funeral of its slain commander Sabzar Ahmed Bhat held in Tral area of Jammu and Kashmir’s southern Pulwama district on May 28 has surrendered before the security forces.

A statement issued by the police here on Wednesday said that Danish Ahmed decided to quit the outfit and give in to the security forces after he was persuaded by his parents and he himself “realised the futility of the path he had chosen to tread upon.”

Ahmed could be seen wearing a battle pouch with a grenade in the footage of Bhat’s funeral which went viral on social media. Soon the police registered a case and took up investigation during which the militant’s identity was established. A resident of Kulangam village of Handwara area in frontier district of Kupwatra, Ahmed was studying in B.Sc (third year) at Doon P.G. College of Agriculture Science and Technology, Dehradun.

He was earlier found involved in stone pelting incidents in Handwara during the post-Burhan Wani killing unrest in 2016, the statement said adding that he was picked up by the police but let off after counselling "keeping in view his career".

“Once it was learnt that Danish Ahmed has joined militancy, the Handwara police and the Army’s 21 Rashtriya Rifles got in touch with his parents and impressed upon them to counsel their son for surrender,” the statement said. It added, “His parents were convinced that if he surrenders, he would be dealt with fairly under law”.

The statement further said that efforts made by security forces yielded positive results and Ahmed surrendered before the Handwara police and the 21 RR. “On being questioned, he revealed that he was in touch with terrorists of south Kashmir region on social media sites and that it was on their instigation that he had decided to become a terrorist,” the police said.

It also claimed that the Hizbul commanders had given Ahmed the task of ‘activating’ some local youth in North Kashmir and make the region as militancy infested as the southern part of the Valley.  “However, after spending a few days with the terrorists in South Kashmir, he realized the futility of joining militant ranks,” the police statement said. It added that Ahmed is being considered under the J&K Surrendered Militants Rehabilitation Policy.

Meanwhile, thousands of mourners on Wednesday attended the funeral of Adil Farooq Magray, a youth from southern Shopian district killed in the security forces’ firing on protesters who allegedly disrupted a cordon-and-search operation against militants launched by the latter in Ganawpora village on Tuesday evening. Magray was laid to rest at a local ‘martyrs’ cemetery amid chanting of pro-freedom slogans, the witnessed said.

Shopian and neighbouring areas are observing a complete shutdown to mourn and protest the killing of the youth whereas the authorities have suspended mobile and Internet services in south Kashmir parts “as a precautionary measure” in view of heightened tensions. Protests and clashes between irate crowds of youth including students and the security forces have been reported from several Kashmir Valley areas including Awantipora, Pulwama and Handwara. The security forces have used teargas to quell the protesters, reports said.

A report from the frontier said that two unidentified militants were killed in an ongoing encounter in Machael sector along the Line of Control (LoC) in Kupwara district.

Officials said that the Army 56 RR had earlier launched a cordon-and-search operation in Sardari Nad forest area of Macheal after inputs about the presence of militants. "The terrorists hiding in the woods opened fire, triggering an encounter which is still underway. One terrorist has died, so far," said a defence spokesman here.

Latest reports from the area said that one more militant has been killed in the encounter raising the toll to two. The officials said that the militants may have sneaked into Jammu and Kashmir from PoK overnight.