The visits are significant as both the leaders will be making their first official visits after elections. 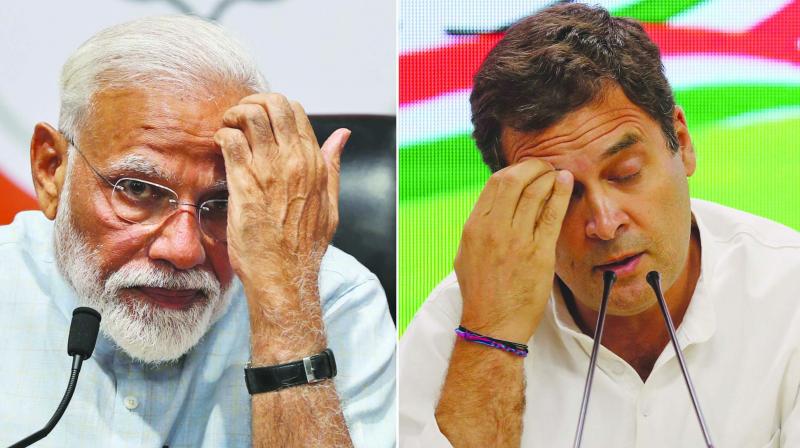 While PM Modi will be landing in Kochi, Gandhi will travel to his home constituency Wayanad. (Photo: AP)

New Delhi: Prime Minister Narendra Modi and Congress president Rahul Gandhi are slated to visit Kerala today to address public meetings. The visits are significant as both the leaders will be making their first official visits after elections.

While PM Modi will be landing in Kochi, Gandhi will travel to his home constituency Wayanad. This will be Gandhi's first visit after he won the seat in the recently held Lok Sabha polls. Similarly, this will be PM Modi’s first visit in his second term.

Gandhi will stay in his constituency till Sunday during which he will meet party workers and citizens. He tweeted about his visit:

I will be in Wayanad, Kerala starting this afternoon and till Sunday to meet citizens & Congress Party workers. It’s a packed schedule with over 15 public receptions planned over the next 3 days. pic.twitter.com/1r71RsgI9X

Rahul is set to hold six roadshows in the state. He will reach Kozhikode on Friday morning and he is expected to spend two days in Wayanad, which gifted him a record victory.

PM Modi will reach Kochi at 2335 hours. On Saturday morning, he is scheduled to visit at Sree Krishna Temple in Guruvayur, after reaching there by a special helicopter from the Naval Airport in Kochi.

He will also meet and address party functionaries in the temple town. The PM will also inaugurate a permanent helipad in Guruvayur. PM Modi will return to Kochi at 12.40 pm.

Rahul had on May 24 expressed gratitude to the people of Wayanad for choosing him as their representative in the Lok Sabha.

On May 31, Rahul Gandhi wrote a letter to Kerala Chief Minister Pinarayi Vijayan requesting him to order an enquiry into the 'suicide' of a debt-ridden farmer from Wayanad. Gandhi also urged him to extend financial support to the family of the deceased.

Gandhi, who netted 7,05,034 votes in Wayanad, won by 4,31,063 votes against his nearest rival Left Democratic Front (LDF)'s PP Suneer in the constituency.

Gandhi is also likely to meet the family of a farmer who committed suicide recently.