The lone private security guard who tried to shield the Duty Medical Officer from the attack, was locked inside the bathroom 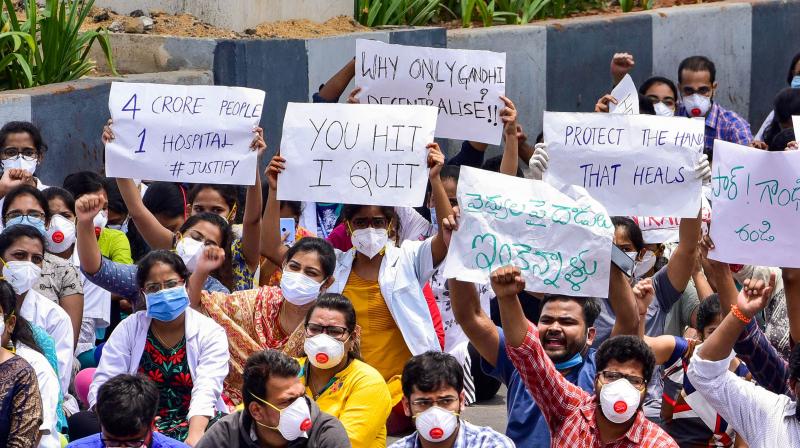 PG doctors stage a protest against alleged misbehavior and manhandling of doctors treating COVID-19 patients during the nationwide lockdown, near Gandhi Hospital in Hyderabad. PTI photo

The police team posted outside the Intensive Care Unit (ICU) of Gandhi hospital, where family members of a Covid-19 patient attacked a doctor yesterday — left 30 minutes before their shift was to come to an end, without waiting for their colleagues to relieve them and take over — which gave the attackers a free run, multiple eye-witness accounts suggest.

The lone private security guard who tried to shield the Duty Medical Officer from the attack, was locked inside the bathroom (along with the doctor) by the two attackers, who created a ruckus after their family member died of Covid-19 last evening.

Eye witnesses and hospital sources told Deccan Chronicle that trouble was in the offing at the ICU as attendants of several patients were making regular attempts to get inside the ward. Some would get food and medicines for the patients while others said they had to take the patients to the toilet as they were unable to do so on their own.

Many attendants often complained of the poor facilities in the ward and argued that there was no one to take care of the patients needs. This was the reason why many of them often  demanded access to the ward so that they could take care of their ailing family members.

But for the hospital authorities and the policemen alike, the top priority was to prevent attendants from going inside as most of the elderly patients in the ICU were Covid-19 positive.

''Over the last few days, the policemen on duty at the ICU ensured that no attendant was able to get inside as there was strict monitoring. Even the entry gate was locked and only the medical staff had access,'' sources said. But the increasing number of patients and lack of medical attention was constantly bothering the attendants.

Policemen posted in different wards including the ICU work in three shifts — 6 a.m to 2 p.m is the first shift, 2 p.m to 8 p.m is the second while the third shift is from 8 p.m to 6 a.m.

Eye-witnesses said that it was around 7.30 p.m when the two police Constables and one Sub-inspector of police who were present there since 2 p.m., were no where to be seen in the ward. ''They left without waiting for their colleagues in the next shift to arrive and relieve them, which would have happened at 8 p.m.,'' they said.

Some 15 minutes after the policemen left, all hell broke loose following the death of the 55-year-old man. Emotionally charged and hurling abuses, his relatives picked up a stool, a chair and threw it at the doctors and nurses and attacked them after barging inside the ward.

It was only after frantic calls to the superiors in the hospital that policemen present elsewhere in the premises were asked to rush to the ICU, located on the third floor of the emergency block. By the time they reached, the damage was done. ''Had the police team been present at the time, the attack could have been thwarted or dealt with effectively,'' eye-witnesses said, describing the attackers as being in a ''very foul mood.''