Lashkar militants took help of Sandeep to loot the ATMs and indulge in immoral activities in the villages as well. 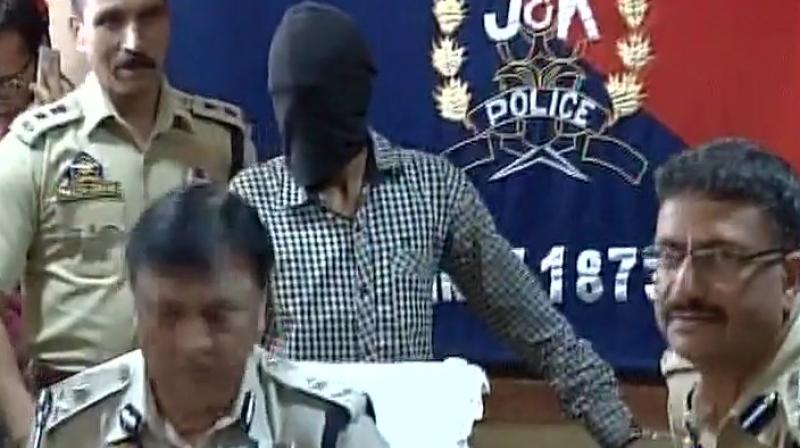 Srinagar: Jammu and Kashmir police on Monday claimed busting a module involved in a series of “sensational crimes” including terror acts in southern parts of the Kashmir Valley. Implausibly, one of the two accused arrested by it is a Hindu from Uttar Pradesh.

Inspector General of Police (Kashmir range) Munir Ahmed Khan at a press conference in Srinagar called it “a major breakthrough” and said that module was busted after “strenuous efforts” put in by the police in Anantnag district of the Valley. He identified the duo involved in a series of terror acts and crime including sneak attacks on security forces’ convoys, camps and installations and weapon snatching incidents as Sandeep Kumar Sharma alias Adil, a resident of UP, and Muneeb Shah of Kulgam district of the Valley.

He said that complicity of Sharma has been found in the June 3, 2017 attack on an Army convoy at Lower Munda, Qazigund along the Srinagar-Jammu Highway, weapon snatching incident at the guard-post at the residence of a J&K High Court judge at Anchidoora in Anantnag on June 13 and the ambush on a police vehicle in the district’s Acchabal area on June 16 in which six cops including Station House Officer Feroz Ahmed Dar were killed.

“Besides these terror acts, he along with his associates has been involved in a number of cash looting incidents at Automated Teller Machines (ATMs) in south Kashmir,” the IGP said.

He alleged that the module is part of Lashkar-e-Taiba militant outfit.

“In pursuance of the said criminal conspiracy which started sometime in January 2017, Sharma and some of his Valley-based associates came to Kashmir from Patiala (Punjab) for carrying out criminal activities,” Khan said.

He added, “Consequently, the group stayed at Wanpoh (Anantnag) and soon got involved in different kind of robberies including ATM looting in South Kashmir. In these crimes, they worked in conjunction with LeT in South Kashmir”.

He also said that Sharma along with some of his associates was arrested by the police in a robbery case in March 2017 and remained in judicial custody till he obtained bail from a court. Later he joined the LeT group led by Bashir Ahmed Wani alias Bashir Lashkari and worked as his “key aide”.

Lashkari was along with a Pakistani militant killed in a fire fight with the security forces at Brenti-Batapora in Dialgam area of Anantnag on July 1. The IGP said that Sharma was present in the house where militants were trapped at Brenti-Batapora.

“He used his old acquaintances and came in touch with a family at Brenti –Batapora. With the active pursuance of his associates, he became part of the over-ground group of the LeT. During the encounter, he was rescued along with other members of the family by the police,” he said.

During investigations, it was revealed that Sharma along with some other persons “hatched a criminal conspiracy leading to providing shelter, ferrying of terrorists from one place to other for terror strikes and actively participating in terrorist activities.”

The IGP said that the investigations are still underway.

“Investigation is going on for ascertaining the roles of his others associates in the crimes. The investigation, so far, conducted has revealed that LeT in league with criminal network is raising money by looting banks especially ATMs in South Kashmir Range, besides using these networks to further terrorist activities”, the police officer said.

Meanwhile, the Army on Monday said that two militants were killed by it in the Nowgam sector along the Line of Control (LoC) in Kupwara district on Sunday night.

“The Pakistani troops resorted to the indiscriminate firing along the LoC on Sunday night. The own troops retaliated befittingly. Two terrorists who were attempting to sneak into Jammu and Kashmir from PoK under the firing cover from the Pakistani troops were killed,” said a defence spokesman in Srinagar. He added that the search operation was still underway to track any infiltration when reports last came in.