Gangster shot dead in UP jail

Ten bullets means that either Rathi reloaded the pistol and continued firing or there was another person who was involved in the killing. 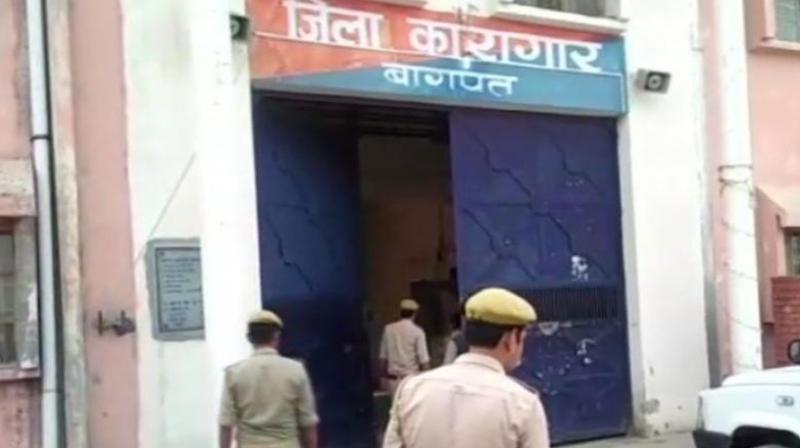 Police sources said Bajrangi was shot dead allegedly by Sunil Rathi, a rival gangster lodged in the same jail, at 5.30 am on Monday. (Photo: ANI)

Lucknow: Dreaded mafia don Munna Bajrangi aka Prem Prakash Singh was shot dead in Baghpat jail on Monday morning. Bajrangi, 51, was lodged in Jhansi jail and was brought to Baghpat district jail on Sunday night as he was due to appear at a court hearing in a case related to extortion that was listed for Monday.

Police sources said Bajrangi was shot dead allegedly by Sunil Rathi, a rival gangster lodged in the same jail, at 5.30 am on Monday. Rathi pumped 10 bullets into Bajrangi, who died on the spot.

Ten bullets means that either Rathi reloaded the pistol and continued firing or there was another person who was involved in the killing.

Rathi reportedly threw the pistol that he used into a gutter and the weapon is yet to be recovered. An FIR has been registered against Rathi.

The murder raises several questions about the security inside the jail and the role of jail staff who claim they did not know how a firearm was smuggled inside. The murder of Bajrangi is likely to unleash a fresh round of gang warfare in the state’s underworld.

UP chief minister Yogi Adityanath said an inquiry had been ordered into security lapses inside the jail, and that the guilty would be punished. “I have ordered a magisterial inquiry and suspension of the jailor. Such an incident occurring inside the jail premises is a serious matter. We will hold an in-depth investigation and strict action will be taken against all those responsible,” the CM said.

UP’s principal home secretary Arvind Kumar said jailor Udai Pratap Singh, deputy jailor Shivaji Yadav, head warden Arjinder Singh and warden Madhav Kumar had been suspended over the incident. Incidentally, Munna Bajrangi’s wife, Seema Singh, had addressed a press conference in Lucknow on June 29 and claimed that there was a conspiracy to kill her husband. “The police and the STF are also involved in this”, she had said.

Munna Bajrangi at one time had a reward of `7 lakhs on his head and had over 40 cases related to murder, kidnapping and extortion registered against him. There were cases against him in Haryana and Mumbai too. He owed allegiance to the Mukhtar Ansari gang, but was also operating independently.

Bajrangi was arrested in 2009 by the Delhi police special cell for the murder of BJP MLA Krishnanand Rai. In 2016, his brother-in-law Pushpajit Singh was shot dead in Lucknow, and the killing was said to be the result of an underworld gang war.

Bajrangi had in 2012 unsuccessfully fought the state Assembly elections from Mandiyahu in Jaunpur on an Apna Dal ticket. Born in 1967 in Jaunpur district, he was a school dropout and entered the world of crime at the age of 17.