India to pay for Dujana's killing: Threat note, bomb found in UP train

The team conducted an elaborated search operation and the train received the clearance at 7:30 am. 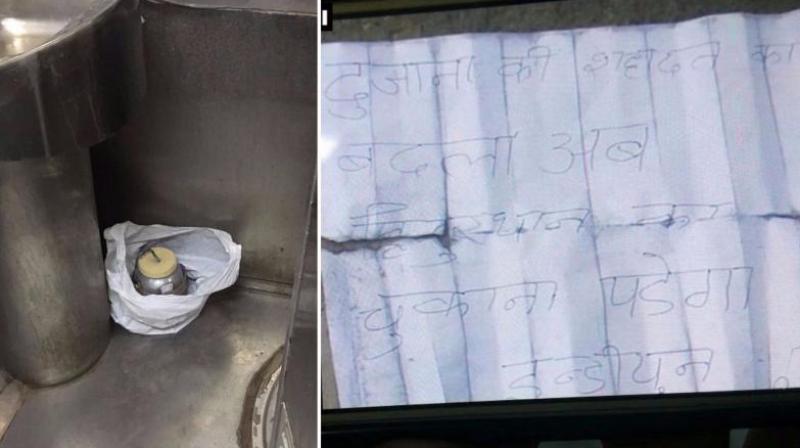 Akal Takht Express was halted at the Akbarganj Railway station at 1:14 am after Guard and TTE received information about a suspected object lying in toilet of coach number B3. (Photo: ANI)

The train was halted at the Akbarganj Railway station at 1:14 am after the Guard and the Travelling Ticket Examiner (TTE) received information about a suspected object lying in the toilet of coach number B3. The object was kept in a packet and was assumed to be a bomb.

As soon as the Government Railway Police (GRP) control received the information, they stopped the train at the loop line. The Shivratanganj Police also reached the spot and vacated coach number B3 and B4 for the safety purpose.

"The train was stopped at the loop line of the Akbarganj Railway Station. A team of bomb disposal rushed to the spot and then the device was taken out of the train and diffused," Superintendent of Police Saumitra Yadav told the reporters.

A note was also found, along with the object, which stated, "Dujana ki shahaadat ka badla abb Hindustan ko chukaana padega." (India will have to pay for LeT militant Abu Dujana's death)

The team conducted an elaborated search operation and the train received the clearance at 7:30 am, following which it departed from Amethi.

"As per information the bomb was of very low intensity," he said, adding that further probe in being to done to identify the person who placed the packet in the train.

Lashkar-e-Taiba (LeT) chief commander Abu Dujana of Pakistan along with his accomplice were killed in an encounter with security forces at Hakripora village in Jammu and Kashmir's Pulwawa district on August 1.

Dujana was one of the most wanted terrorists and carried over Rs. 15 lakh bounty on his head.

The Indian Army released a list of 12 most-wanted terrorists operating in the Kashmir Valley, in July, and Dujana was in that list.