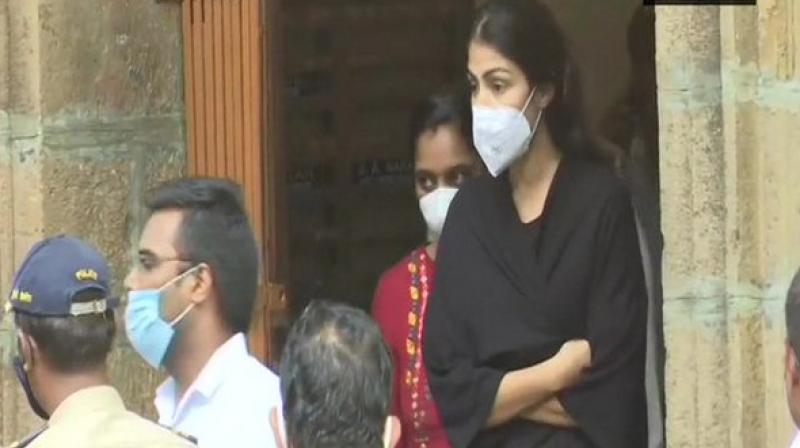 Actor Rhea Chakraborty was taken to Mumbai's Byculla Women’s Prison as she was arrested by NCB. (ANI Photo)

Mumbai: Actor Rhea Chakraborty was taken to Mumbai's Byculla women’s prison as she was arrested by the Narcotics Control Bureau on drug charges related to the Sushant Singh Rajput case. After magistrate court rejected her bail plea, Rhea’s lawyer approached the sessions court. The court will hear the application on Thursday.

In the plea filed in a sessions court on Wednesday, Rhea's lawyer also claimed that she has not committed any crime whatsoever and has been falsely implicated in the case.

“Rhea was taken to Byculla prison at around 10.15am after she spent a night at the NCB lockup. She has been put up at the women’s prison till her judicial custody ends,” said an official privy to the investigation.

The NCB has collated the required evidence in the case and will take an action based on the statements recorded. Rhea has been found procuring narcotics substances for Rajput. The suppliers of banned substances, identified as Abdul Basit Parihar and Zaid Vilatra, have already been arrested by the NCB.

The deceased actor’s house manager Samuel Miranda, house help Dipesh Sawant and Rhea’s brother Showik have been arrested for mediating and passing on the narcotics substances from the peddlers to Rhea and Rajput.

The court will also hear plea filed by Rhea’s brother Showik, who was arrested on September 4 by the NCB for his alleged involvement in the case.

The Central Bureau of Investigation (CBI) and Enforcement Directorate (ED) are continuing their investigation in abetment to suicide, cheating and siphoning of funds and money laundering respectively. If they gather clinching evidence against Rhea at a later stage, they can formally arrest the actress and seek her custody separately.