The turtles, weighing 440 quintals, were found stuffed in sacks and lay scattered on the ground inside the compound of the accused's house. 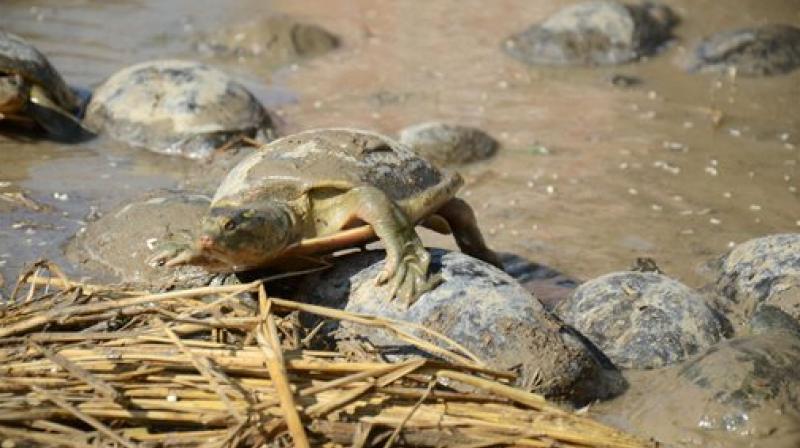 The police and the wildlife authorities on Tuesday arrested the kingpin of a wild animal smuggling gang and recovered 6430 tortoises concealed in 115 gunny bags from a village in Amethi district. (Photo: AP)

Lucknow: In one of the biggest such hauls in India, Uttar Pradesh police seized 6,400 freshwater turtles stuffed in bags which were destined for China and other Southeast Asian countries as part of a massive smuggling network.

Raj Bahadur Singh, the kingpin of an inter-state gang involved in smuggling of turtles, was arrested in the raid carried out at Gauriganj town of Amethi on Tuesday, Special Task Force (STF) spokesman said in Lucknow.

The turtles, weighing 440 quintals, were found stuffed in sacks and lay scattered on the ground inside the compound of the accused's house.

"We have recovered such a huge amount of turtles from one single location. We are investigating this further and looking at the involvement of more people in the smuggling ring," said Additional Superintendent of Police Arvind Chaturvedi, who led the STF raid.

During interrogation, Singh disclosed that small poachers were involved in catching turtles from Gauriganj, Jagdishpur and Salwan areas and supplying them to organised smugglers, the official said.

Singh said he used to collect these animals from smugglers and transport them to Kolkata - the main transit point - from where they are smuggled to Bangladesh, Myanmar, China, Thailand, Hong Kong and other Southeast Asian countries.

40 per cent of the turtle species are listed in the endangered category of International Union for Conservation of Nature's (IUCN's) Red List of Threatened Species.

There is a high demand for turtles abroad for meat and so-called use in occult and aphrodisiacs.

The official claimed that the accused also gave information about smugglers and poachers in UP, West Bengal and Odisha reflecting the huge and highly organised smuggling network in the country.

The turtle species is native to South Asia and is found only in India, Pakistan, Bangladesh, Myanmar and Sri Lanka.

In India, it is found in the Gangetic belt all along Uttar Pradesh and Bihar, especially in the Ghagra-Gomti tributaries.

They are spread across Fatehgarh, Kannauj, Allahabad and Varanasi in the state.

Meanwhile, UP forest department today issued a state-wide alert and has warned that more raids will be conducted in the coming days to crack down on the smuggling of turtles.

Uttar Pradesh is home to 14 endangered turtle species of the total 28 found in India. These include the Indian flapshell, softshell, roofed and black turtles.

"There is a belief from Feng Shui traditions that a turtle with all 20 nails - 5 on each leg - brings good luck," a senior Wildlife Crime Control Bureau (WCCB) officer said.

Turtles are also believed to be in high demand around the harvest festival of Makar Sakranti and its meat, which is said to be clean white and aromatic, is consumed in eastern and north eastern India.

These reptiles are said to be useful for maintenance of purity of the river Ganges and its ecological balance as they feed on crabs, snails, dead fish and fragments of dead animals.

"Without these turtles, cleaning of Ganga would be even more difficult," said a wildlife activist.

Experts say India ranks among the top five Asian countries for turtle conservation, but nearly 40 per cent of the species are listed as endangered on IUCN's Red List of Threatened Species.