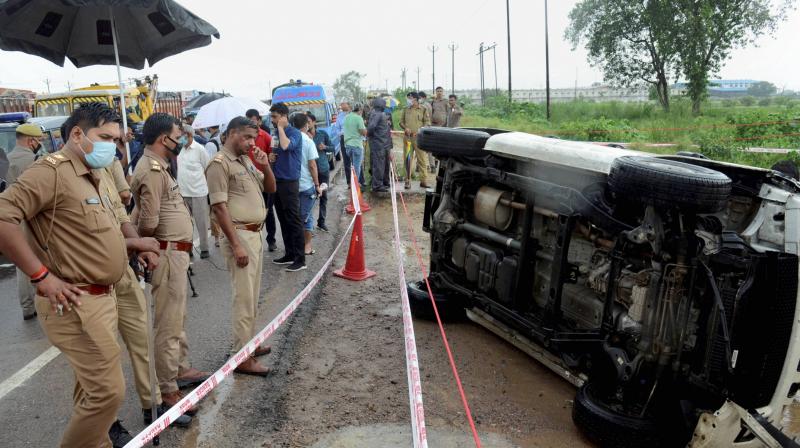 Police inspect the encounter site where gangster Vikas Dubey was killed when he allegedly tried to escape from the spot following an accident, near Kanpur, Friday morning, July 10, 2020. Dubey, accused of killing eight policemen, was being brought to Kanpur from Ujjain in Madhya Pradesh a day after his arrest. (PTI)

Hyderabad: The early morning 'encounter' of gangster Vikas Dubey was described as a ''very strange happening'' by a member of the Supreme Court-appointed inquiry commission that is probing the ''encounter'' killing of four alleged accused in the gangrape and murder of veterinary doctor Disha near Hyderabad last year.

With the COVID-19 pandemic hampering their work, the three-member commission will return to Hyderabad to restart their proceedings in the 'Disha' case killings once the situation normalises.

''It (the Vikas Dubey ''encounter'') is a very strange happening,'' D R Karthikeyan, former CBI director and one of the members of the inquiry commission, told Deccan Chronicle on the telephone from New Delhi, a clear indication that the former IPS officer, who headed the Special Investigation Team (SIT) that probed the Rajiv Gandhi assassination case, is not convinced by the Uttar Pradesh police's version of the gangster's killing in police custody.

The four accused in the Disha gangrape and murder case -- Muhammed Arif, J Naveen, J Shiva and Ch Chennakeshavulu -- were gunned down in an early morning ''encounter'' in Shadnagar, while in police custody on December 6.  The Cyberabad police had claimed that the accused snatched the weapons of the policemen and opened fire . All  four were killed in retaliatory fire, they had said. The UP police came out with more or less the same version after Vikas Dubey's killing.

''Going by all the reports about Vikas Dubey's killing, the entire incident is very strange. I would not like to say more on this,'' Karthikeyan said, which was obvious as he is one of the members of the commission probing the Disha 'encounter.'

Referring to the Disha probe, the former IPS officer, said that the commission has not yet finalised the date for its return to Hyderabad to restart proceedings. ''We will return once normalcy is restored in Hyderabad,'' he said referring to the Covid-19 pandemic. The Supreme Court had granted them six months to probe and submit their findings. The Commission, appointed in December, will be seeking more time from the apex Court, as the six month deadline has already come to an end.

While retired Supreme Court Judge Justice V S Sirpurkar is heading the commission, retired High Court Judge Rekha Sundar Baldota and Karthikeyan are its members. The commission had visited Hyderabad in the first week of February and they had been allotted office in the Telangana High Court premises.