The First Information Report (FIR) states that hospital had no fire alarm system, no fire audit had been done 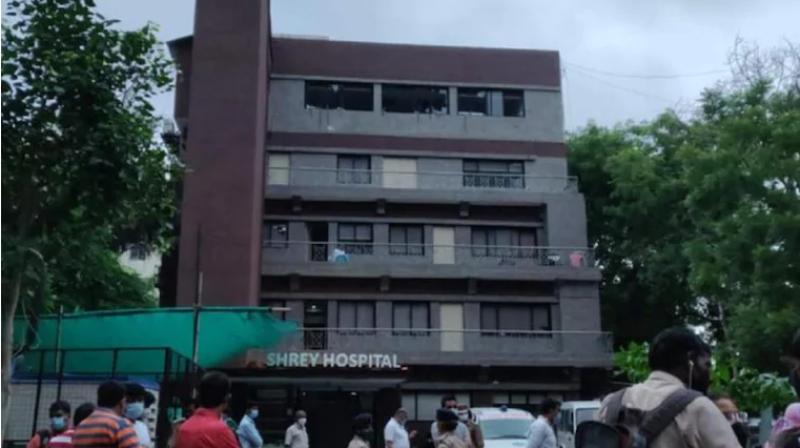 Ahmedabad: Days after eight coronavirus patients died in a fire at a private hospital here, the police has registered a case of alleged negligence against its main administrator, an official said.

The First Information Report (FIR) states that hospital had no fire alarm system, no fire audit had been done, and the staff had no training in fire-fighting.

The fire broke out at the ICU ward of Shrey Hospital in the wee hours of August 6.

On Monday, an FIR under IPC section 304 (A) (causing death by negligent or rash act) was registered against the hospital's main administrator Bharat Mahant (57).

He has not been arrested yet, said Assistant Commissioner of Police L B Zala.

Shrey Hospital was one of the 60-odd private hospitals authorised by the Ahmedabad Municipal Corporation to treat coronavirus patients.

As per the FIR, the fire started in the fourth-floor ICU ward around 3 am due to a short circuit. While some of the patients died due to burn injuries, others died due to suffocation, it said.

There had been no fire safety audit of the hospital prior to the incident which amounted to "grave negligence" on the accused's part, the FIR said.

Nor was there any fire alarm system; and though there were fire extinguishers in the ward, they were not used because the staff had not been given training in fire-fighting and emergency rescue, the FIR alleged.

On Tuesday, the Gujarat government also ordered a judicial inquiry into the incident by a retired high court judge after a two-member inquiry committee of senior IAS officers submitted its report.