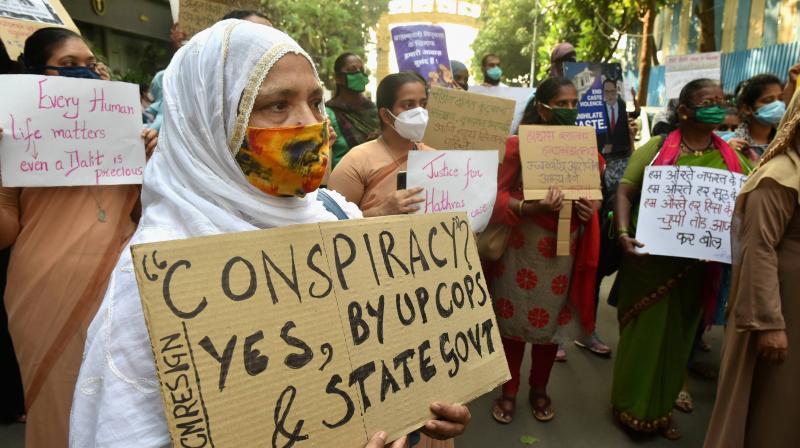 An activist holds a placard during a protest against the Hathras victim, outside Chaitya Bhoomi, in Mumbai. — PTI photo

New Delhi: The CBI has taken over investigation into the alleged gangrape of a Dalit woman in Hathras, Uttar Pradesh on September 14, officials said.

The agency registered an FIR on Sunday morning under Indian Penal Code (IPC) sections related to gangrape and murder, they said.

The case was earlier registered at Chandpa Police Station, in Hathras district of Uttar Pradesh, on a complaint by the victim's brother.

"The complainant had alleged that on 14.09.2020, the accused tried to strangulate his sister in the millet field. The case has been registered by CBI on the request of Uttar Pradesh Government and further Notification from Government of India," CBI Spokesperson RK Gaur said.

The agency has constituted a team to probe the case, he said.

The 19-year-old woman died of severe assault injuries at Delhi's Safdarjung Hospital on September 29. She was allegedly gangraped on September 14 by four upper caste men.