JNU warns students, says no violence will be tolerated 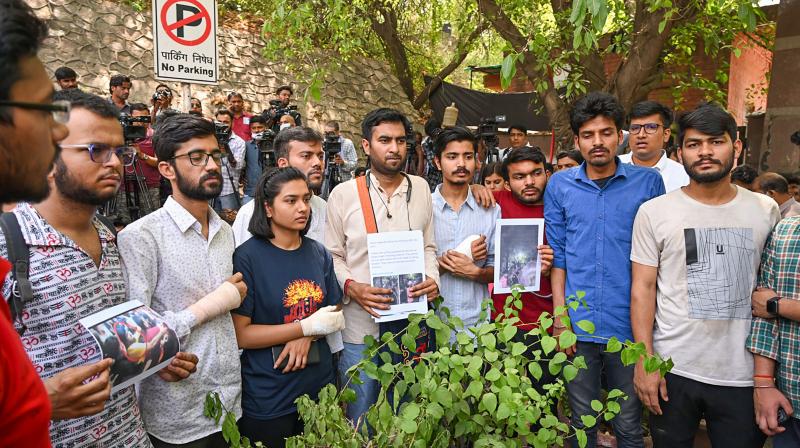 ABVP students interact with media after the clash between students of left-wing and ABVP over non-veg food during Navratri, outside JNU campus, in New Delhi, Monday, April 11, 2022. (PTI/Ravi Choudhary)

New Delhi: The Delhi police on Monday registered two First information Reports (FIRs) over the clashes at the Jawaharlal Nehru University campus over non-vegetarian food on Sunday night. An FIR was filed against unknown ABVP students based on the complaint received from a group of students on Monday. A counter FIR was also registered Monday afternoon against unknown JNU Students’ Union, SFI and DSF students. The police said it had also tightened security at the campus to maintain peace and ensure that no further untoward incident takes place.

The JNU administration on Monday warned students not to get involved in any incident that disturbs peace and harmony on the campus, saying no violence will be tolerated on the campus.

Scores of JNU students affiliated to the All-India Students Association held a protest near the Delhi police headquarters, demanding the arrest of ABVP activists for their alleged role in the violence. The AISA activists alleged some students were detained and taken to the Tughlaq Road police station.

Sai Balaji, AISA president, said the protest will continue. “People who attacked the students are repeat offenders, so is the JNU administration. The protest at PHQ (police headquarters) was to ensure accountability by the Delhi police and ensure that justice happens. There will be more protests,” he added.

“Women protesters were manhandled and their clothes pulled by male security personnel. Several have been injured by the Delhi police. We have been detained inside Tughlaq Road police station,” AISA activist Neha said.

The police said AISA members gathered around Jai Singh Road, New Delhi, where prohibitory orders under Section 144 CrPC was in force. “They were asked to leave the place but they violated lawful directions. Around 48 males and 22 females were detained. No woman protester was handled by policemen and no one was manhandled,” said a senior police official.

The Jawaharlal Nehru University Teachers' Association condemned the violence and demanded that the vice-chancellor intervene in the matter.

The university released a statement Monday, saying there was a scuffle on the campus on April 10 between students’ groups. “It was the occasion of Ram Navami. A havan was organised by students in Kaveri Hostel, and there were some who were objecting to this. The wardens and the dean of students tried to pacify them and the havan concluded peacefully. Despite this, some students were not happy with this, and soon after, at the time of dinner, a ruckus was created there and heated arguments were followed by an altercation between both groups in the Kaveri Hostel,” said the registrar in the statement.

“The wardens clarified on the spot and issued a notice when the ruckus was going on among students that there is no bar on serving non-vegetarian food. The warden has also issued a notice calling for peace and clarifying these issues,” the statement read.

The JNU registrar issued an appeal to the students, taking serious note of the incident, and the vice-chancellor, rector and other officials visited the hostel and met the students. “The V-C conveyed that no violence will be tolerated on campus and appealed to the students to maintain peace and harmony,” said the registrar.

“The JNU administration reiterates its resolve for zero tolerance towards any form of violence on campus. The students are also warned to refrain from being involving in such incidents which disturb peace and harmony on campus. If anyone is found indulging in such acts, they will be liable for disciplinary action as per university rules,” he said.

The ABVP on Monday alleged that students from Left-backed outfits wanted to disrupt a Ram Navami puja, and were using diversionary tactics by raising the issue of serving of non-vegetarian food. The Left-led JNU Students Union (JNUSU) accused the ABVP of “orchestrating the incident and unleashing violence in the name of food”.

On Sunday night, two groups of students clashed at JNU’s Kaveri Hostel allegedly over the serving of non-vegetarian food on Ram Navami in the mess, with the police saying six students were injured in the violence. The police said 20 people were injured in Sunday’s clashes between the two groups.

“Accordingly, the police have a registered FIRs under Section 323 (voluntarily causing hurt), 341 (wrongful restraint), 509 (word, gesture or act intended to insult the modesty of a woman), 506 (criminal intimidation) and 34 (acts done by several persons in furtherance of common intention). Further investigations are on to collect factual or scientific evidence and identify the culprits,” said the DCP.