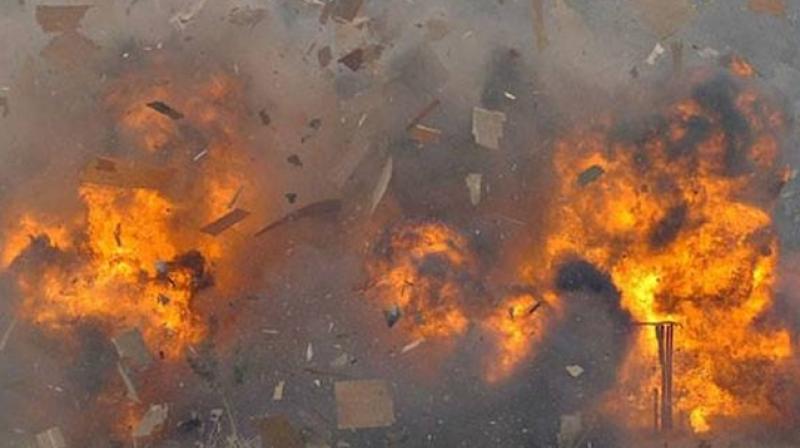 The Army further said that the operation at Pargal led to, apart from the elimination of two suicide attackers, large recoveries including two AK-47 rifles with nine magazines and 300 rounds of ammunition, five grenades, and other "administrative stores". — Representational Image/PTI

SRINAGAR: A junior commissioned officer (JCO) and three riflemen were killed and two other jawans were injured in a pre-dawn suicide attack by militants at an Indian Army camp at Pargal in Jammu and Kashmir 's Rajouri district on Thursday.

The officials said that two attackers equipped with assault rifles and hand grenades were also killed in the return fire by the soldiers and thereby a repeat of the Uri-like terror attack was foiled.

The Army, in a statement, said, "In the early morning hours, alert sentries of the Army post at Pargal in Rajouri detected suspicious persons approaching their post, taking advantage of the inclement weather and dense foliage. The sentries challenged the two terrorists who lobbed grenades while attempting to gain entry inside the post. However, alert troops cordoned off the area and engaged them in a fire fight, thereby pinning them".

"Two terrorists were killed while six soldiers, including an officer of Major's rank and a JCO, sustained injuries in the clash," said a defence officials in Jammu.

The Nagrota (Jammu)-based White Knight (16) Corps of the Army confirmed that four of the injured solders -- Subedar Rajendra Prasad, Rifleman Manoj Kumar, Rifleman Lakshmanan D and Nishant Malik -- succumbed to their injuries "making the supreme sacrifice while neutralising two terrorists on a suicide attack."
In a tweet, it added, "We condole their loss and pray for strength for their family members."

The Army further said that the operation at Pargal led to, apart from the elimination of two suicide attackers, large recoveries including two AK-47 rifles with nine magazines and 300 rounds of ammunition, five grenades, and other "administrative stores".

A defence spokesman in Jammu said that the White Knight Corps Commander Lieutenant General Manjinder Singh constantly monitored the situation on the ground throughout the operation. He added that the area has been sanitised to ensure no other militants are present in and around Pargal.

Mukesh Singh, additional director general of police (ADGP), Jammu, said that a group of armed men tried to cross the fence of the Army camp at Pargal, less than 6 kms from the Darhal police station, and soon an exchange of fire took place. He added that reinforcements from the Army and also the men of the J&K police were immediately rushed to the area to join the operation.

According to a report the clash lasted for three to four hours during which the militants also used armour-piercing steel bullets. The police officials said that they are investigating the nature of the bullets used by the attackers.

The police sources said that in the over three-decade-old militancy in J&K, the armour-piercing steel bullets have been used, so far, only by proscribed Jaish-e-Muhammad 'fidayeen' in many encounters, including the one that took place in the Lethpora area of Pulwama on December 31, 2017.

The suicide attack took place amid the preparations for the 75th Independence Day celebrations in the country and a day after the security forces had killed proscribed Lashkar-e-Tayyaba (LeT)’s "most-wanted" commander Lateef Rather alias Osama and two other militants in a gun fight in Badgam, Kashmir valley.

J&K lieutenant-governor Manoj Sinha, while condemning the suicide attack at the Pargal Army camp, said that the terror plans of militants and their mentors will be dealt with in a befitting manner.

He tweeted, "Strongly condemn despicable terrorist attack in Rajouri; tributes to brave soldiers who made supreme sacrifice. Heartfelt condolences to the families of the Bravehearts martyred in the attack. We shall deal with evil designs of terrorists and their backers in a befitting manner."

Former chief minister and Opposition National Conference leader Omar Abdullah also took to the microblogging site to condemn the attack. He said, "Very sorry to hear about the death in the line of duty of three soldiers following a militant attack in Rajouri. While condemning the attack I send my condolences to the families & my prayers for the swift recovery of those officers & jawans injured in the attack #Rajouri."