India   Crime  13 May 2019  UP woman sold, gangraped; sets herself on fire as police refuse to register complaint
India, Crime

UP woman sold, gangraped; sets herself on fire as police refuse to register complaint

The UP police, however, said the matter is under investigation. 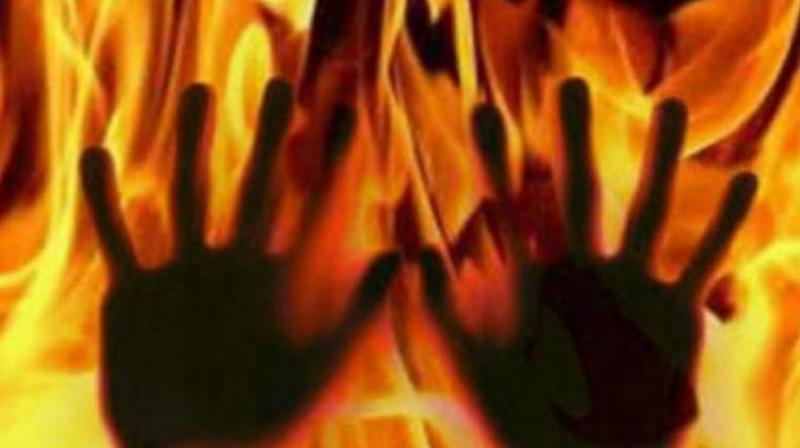 The woman is now admitted to a Ghaziabad hospital with 80 per cent burn injuries. (Photo: Representational)

Meerut: A woman, who was "sold" for Rs 10,000 and raped by people for whom she was forced to work as domestic help, set herself on fire after Uttar Pradesh police officials allegedly refused to register her complaint, according to the Delhi Commission for Women.

The woman is now admitted to a Ghaziabad hospital with 80 per cent burn injuries.

The UP police, however, disputed the allegation that senior officials turned her away and said the matter is under investigation.

DCW chief Swati Maliwal wrote a letter to UP Chief Minister Yogi Adityanath, urging him to investigate the police officials in Hapur district for refusing to register the complaint of the woman. She wrote that the woman suffered intolerable abuse at the hands of UP police.

Maliwal said because of the insensitive and shameful attitude of the police officials, the woman had to set herself on fire. According to the DCW chief's letter, the woman was "sold" to a man, who had taken loans from several people, in Hapur for Rs 10,000.

He forced her to work as domestic help for those people without paying her. The woman was repeatedly abused and gangraped at these places.

The woman has alleged that she approached the Hapur SP and other senior officials but they did not register her complaint nor they took action against the people she had named. Following this, she attempted suicide by immolating herself on April 28.

Maliwal has urged Adityanath to provide proper compensation to the woman. After the DCW intervention, UP police have registered an FIR against Babugarh sarpanch and 13 others for raping the woman, but they say prima facie the case is suspicious and hence they have not arrested anyone.

Hapur SP Yashvir Singh told PTI-Bhasha over the phone that whether she immolated herself or she was set on fire is under investigation.

Singh refused to accept that police officials refused to register her complaint because of which she had to attempt suicide. He also said the woman has a history of troubled marriages and she has ended her marriage twice before.

She finally married a man in Moradabad and was living with him, he said. The SP said the incidents of abuse and rape with the woman are five years old and the incidents happened at different times at different places. Police officials have talked to villagers about the woman's complaints but none of them verified her account, he said.