India   Crime  13 May 2021  No bail for Navlakha, house arrest is an option: Supreme Court
India, All India

No bail for Navlakha, house arrest is an option: Supreme Court 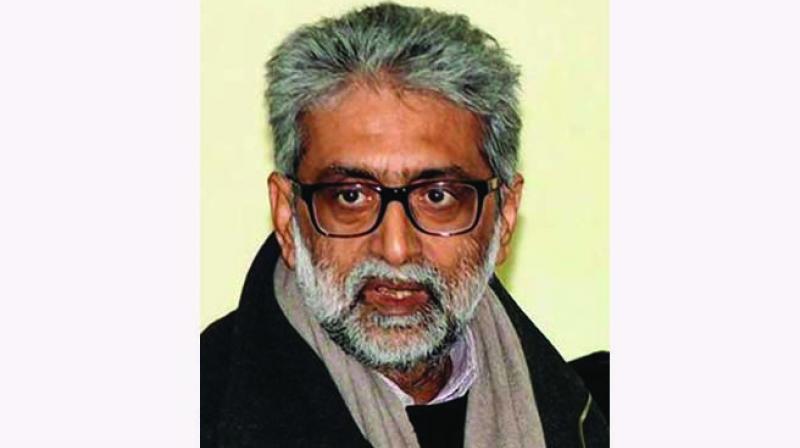 Navlakha and the other activists are accused of allegedly making inflammatory speeches and issuing provocative statements at the Elgar Parishad meeting in Pune on December 31, 2017 that led to violence at Bhima Koregaon the next day. — By arrangement

New Delhi: The Supreme Court Wednesday rejected a plea for default bail by human rights activist Gautam Navlakha, one of the accused in the January 2018 Bhima Koregaon violence case, over his alleged links with Maoists.

Rejecting Mr Navlakha’s bail plea, a bench of Justices Uday Umesh Lalit, Indira Banerjee and K.M. Joseph suggested that the lower courts could put him under house arrest, given the need to stop overcrowding of jails in the midst of the Covid-19 pandemic’s second wave. They said that using the provisions of Section 167 CrPC, an accused can be put under house arrest when sent to judicial custody instead of sending him to jail as is ordinarily done.
Speaking for the bench, Justice Joseph said: “The concept of housearrest as part of custody under Section 167 has not engaged the courts, including this court. However, when the issue has come into focus, and noticing its (Section 167) ingredients we have formed the view that it involves custody which falls under Section 167.”
Justice Joseph said: “We observe that under Section 167 in appropriate cases it will be open to the courts to order house arrest.”

Indicating the criteria, which it said was not exhaustive, Justice Joseph said an accused could be sent to house arrest given factors like “age, health condition and the antecedents of the accused, the nature of the crime, the need for other forms of custody and the ability to enforce the terms of the house arrest”.

Having shown the new course for the subordinate judiciary to follow by sending an accused to house arrest, in the case of Mr Navlakha, the court rejected his contention that he was entitled to default bail as the National
Investigating Agency did not file the chargesheet within the statutory 90 days from the date of his arrest.

Holding that his house arrest wasn’t under Section 167 CrPC, the Supreme Court in its 206-page ruling upheld the Bombay high court’s ruling that the law requiring the NIA to file the chargesheet against an accused within 90 days of arrest was not flouted.

The high court hadn’t accepted Mr Navlakha’s plea to include the 34 days of his house arrest in Delhi from August 28, 2018 to October 1, 2018 to show his incarceration for 93 days in the calculations and dismissed
his appeal on February 3, 2021.

Mr Navlakha and the other activists are accused of allegedly making
inflammatory speeches and issuing provocative statements at the Elgar
Parishad meeting in Pune on December 31, 2017 that led to violence at Bhima Koregaon the next day.

Mr Navlakha had approached the Supreme Court against the Bombay high court order denying him bail. He is among the eight alleged Maoist activists against whom the NIA filed a chargesheet on October 9, 2020. The others are Mumbai’s Anand Teltumbde, Hany Babu, an associate professor in Delhi, Sagar Gorkhe and Ramesh Gaichor of Pune, Jyoti Jagtap of Kondhawa, Milind Teltumbde of Yavatmal and Stan Swamy of Ranchi. Mr Swamy, a 80-year-old priest, was arrested from his home in Ranchi only two days before the filing of the chargesheet.

Anand Teltumbde, a professor who normally lives in Goa, was one of the conveners of the Bhima Koregaon Shaurya Din Prerna Abhiyan and was present at Shaniwar Wada in Pune on December 31, 2017, where the Elgar Parishad programme was organised. The NIA claimed it recovered incriminating documents revealing his role in CPI(Maoist) activities.