At least 9,000 people participated in the religious congregation in Nizamuddin 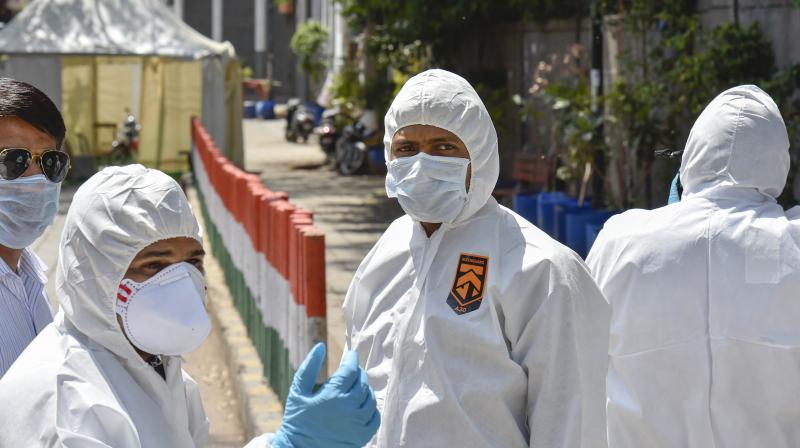 Forensics and crime branch officials arrive at Nizamuddin Markaz to conduct investigation, during the nationwide lockdown to curb the spread of coronavirus, in New Delhi. PTI photo

New Delhi: Tablighi Jamaat leader Maulana Saad Kandhalvi has been booked for culpable homicide after some of the attendees of the religious congregation died due to coronavirus, police said on Wednesday.

Kandhalvi had organised the religious gathering at Nizamuddin Markaz last month against the social distancing protocol imposed by the Centre to curb the spread of the deadly disease.

An FIR was registered against the cleric on March 31 at Crime Branch police station on a complaint of the Station House Officer of Nizamuddin.

He was earlier booked for holding the event, police said.

After several attendees of the Tablighi Jamaat event succumbed to coronavirus, we added IPC section 304 (culpable homicide not amounting to murder) in the FIR against the leader, a police official said.

Some foreigners who attended the event have also been booked for violation of visa norms.

In an audio message, Kandhalvi had said that he was exercising self-quarantine after several hundreds who visited the Tablighi Jamaat congregation at Nizamudddin Markaz tested positive for coronavirus.

The FIR registered against the Tablighi Jamaat event says that the Delhi Police contacted the authorities of Nizamuddin Markaz on March 21 and reminded them of the government order which prohibited any political or religious gathering of more than 50 people.

It says that despite repeated efforts, the event organisers failed to inform the health department or any other government agency about the huge gathering inside the Markaz and deliberately disobeyed government orders.

The sub district magistrate of Defence Colony inspected the premises several times and found that around 1,300 people, including foreign nationals, were residing there without maintaining social distance. It was also found that there were no arrangements of hand sanitizers and face masks, the FIR adds.

The Nizamudddin centre, attended by thousands, turned out to be a hotspot for spread of coronavirus not only in the national capital, but the entire country.

More than 25,500 Tablighi members and their contacts have been quarantined in the country after the Centre and the state governments conducted a "mega operation" to identify them.

At least 9,000 people participated in the religious congregation in Nizamuddin. Later, many of the attendees travelled to various parts of the country.