In Muzaffarpur town, a large number of Army aspirants vented their ire by placing burning tyres on the roads 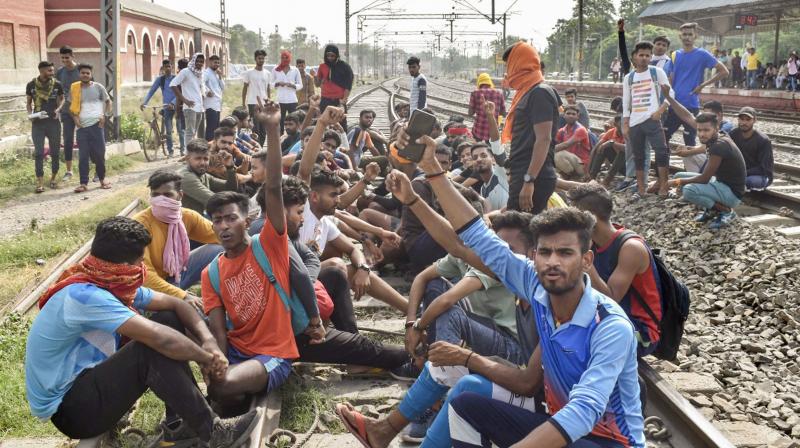 Patna: Protests against the Centre's 'Agnipath' scheme for hiring jawans on a short-term contractual basis continued across Bihar for the second consecutive day on Thursday as aspirants preparing for jobs in defence forces disrupted railway and road traffic in Jehanabad, Buxar and Nawada districts.

Protestors blocked the movement of trains on Patna-Gaya and Patna-Buxar routes by lying down on the railway tracks in Jehanabad and Buxar districts. However, Bihar Police along with their railway counterparts immediately removed the protestors from the tracks.

Hundreds of agitators blocked National Highway 83 in Jehanabad and burned tyres demanding the scrapping of the scheme. Angry protestors took out processions in the three districts and other parts of the state.

Protestors had disrupted railway and road traffic in various parts of the state also on Wednesday.

Under the 'Agnipath' scheme, around 45,000 people aged between 17.5 and 21 years will be inducted into the armed forces for a four-year period, following which most of them will have to take compulsory retirement sans pension or gratuity benefits although some will be retained.

Of the total annual recruits, only 25 per cent will be allowed to continue for another 15 years under permanent commission.

In Buxar district, more than 100 young men stormed the railway station and squatted on the tracks, blocking the onward journey of Patna-bound Janshatabdi Express for nearly 30 minutes.

They raised slogans against the scheme, unveiled the previous day by Defence Minister Rajnath Singh, until security personnel led by RPF inspector Deepak Kumar and GRP SHO Ramashish Prasad, arrived at the spot and warned them against disruption of rail traffic.

There were reports in a section of the regional media that the protesters had hurled stones at Pataliputra Express, which passed through the station, though both Kumar and Prasad denied such an occurrence.

In Muzaffarpur town, a large number of Army aspirants vented their ire by placing burning tyres on the roads around the sprawling Chakkar Maidan where they turn up in large numbers for physical tests which are mandatory for recruitment of jawans.

They said they were exasperated to learn about the new job rules which has come after two years of no recruitment by the armed forces despite their having passed the requisite physical tests.

Many Army aspirants also marched towards the Collectorate where they submitted a memorandum to the District Magistrate.

In Begusarai, Army aspirants, many of them NCC cadets, staged a demonstration at Mahadev Chowk where they carried a huge poster inscribed with the demand rollback of the Agnipath scheme.

Meanwhile, leader of the opposition in the state, Tejashwi Yadav, came out with a flurry of tweets sharing his misgivings about the much touted move by the Narendra Modi government at the Centre.

The RJD leader expressed apprehensions that like contractual hiring in Railways and lateral entry in other government departments, Agnipath will be used to do away with the constitutionally sanctioned reservation benefits.

The former Bihar Deputy CM also alleged BJP and Sangh Parivar may use the scheme for providing arms training, at government expense, to its hate-filled supporters and fringe elements.

As a result of the Agnipath scheme, many young men with military training will be rendered jobless at a tender age of 22. Will it not result in a major law and order problem in the country?, he asked.

He also asked, with rhetorical flourish, whether the government expected youngsters recruited under the Agnipath scheme to spend rest of their lives working as security guards of big capitalists friendly to the BJP.

He also took a dig at Prime Minister Narendra Modi's announcement of 10 lakh government jobs till the end of next year and asked if the number takes into account the 19 lakh jobs promised in Bihar ahead of the 2020 assembly polls.