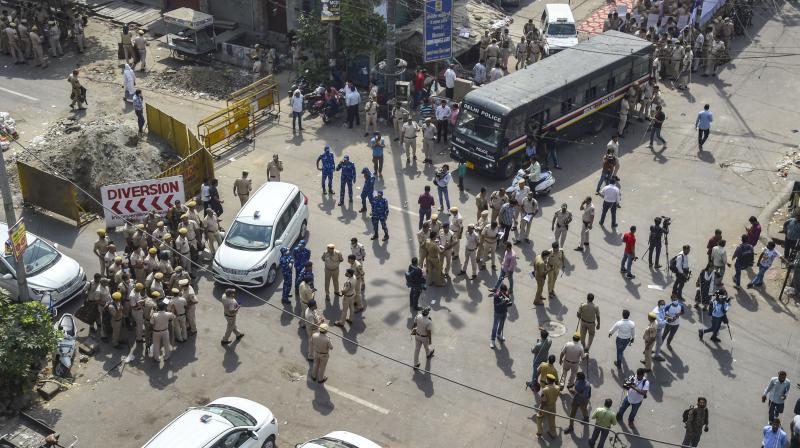 New Delhi: A day after clashes broke out during the Hanuman Jayanti procession at Jahangirpuri C Block in north Delhi, an uneasy calm prevailed Sunday in the violence-hit area. The police claimed the situation is now completely under control and adequate forces have been deployed to avert any untoward incident. Further investigations in the case are under way.

The Delhi police has, meanwhile, arrested 21 people for the clashes, and two juveniles have also been apprehended over the violence. The police said the 21-year-old man who allegedly fired the bullet that hit a sub-inspector was also among those arrested.

Of the 21 people arrested, five are Hindus and the remaining 16 are from the Muslim community. The Delhi police also arrested Ansari, a 35-year-old resident of Jahangirpuri, for alleged involvement in the conspiracy over the communal clashes. The police said Ansari was arrested after his name came up during the investigation.

“Three firearms and five swords have also been recovered from the possession of the arrested persons,” said Usha Rangnani, Northwest district deputy commissioner of police.

The accused were booked under Sections 147 (rioting), 148 (rioting, armed with deadly weapon),149 (unlawful assembly), 186 (obstructing public servant in discharge of public functions), 353 (assault or criminal force to deter public servant from discharge of his duty), 332 (voluntarily causing hurt to deter public servant from his duty), 323 (voluntarily causing hurt), 427 (mischief causing damage), 436 (mischief by fire or explosive substance with intent to destroy), 307 (attempt to murder), 120B (criminal conspiracy) of the Indian Penal Code and Section 27 of the Arms Act.

The police also recovered a country-made weapon from Mohammad Aslam, a resident of Jahangirpuri’s CD Park slum cluster, which he allegedly used to open fire during the clashes on Saturday evening.

“One of the accused persons, identified as Aslam, opened fire that hit a sub-inspector of the Delhi police. The pistol used by the accused during the commission of crime has been recovered from his possession,” said Ms Rangnani.

She added that Aslam was also found to be involved in a case registered at the Jahangirpuri police station in 2020 under Sections 324 (voluntarily causing hurt by dangerous weapons or means), 188 (disobedience to order duly promulgated by public servant), 506 (criminal intimidation) and 34 (common intention) of the IPC. During the investigation, another accused, Salim, was also arrested. Salim was found to be previously involved in a robbery and attempt to murder case in Jahangirpuri.

The DCP also said overall nine people, including eight police personnel and one civilian, were injured during the clashes and are being treated at the Babu Jagjivan Ram Memorial Hospital.

The police sub-inspector who received the bullet injury is said to be now stable, recuperating at the hospital. The senior police officer said further investigations were under way.

In order to maintain law and order and area domination, foot patrolling and deep deployment have been employed by the police in the area. To carry out intensive rooftop surveillance through aerial patrolling in the communally sensitive areas, the police has been using drones since Sunday morning.

The Delhi police also beefed up security in and around C and D blocks near the mosque. Most Hindus live in D block while most Muslim live in C block. Barricades have been put up and police personnel are deployed at every 200 metres.

Despite the security arrangements, the shops around the mosque were all shut. But the shops and markets near the Jahangirpuri Metro station were functioning as usual on Sunday.

According to Deependra Pathak, special commissioner of police, law and order (Zone 1), efforts are being made to identify the other accused with the help of CCTV cameras and other video footage.

“Drones and facial recognition software are being used to identify those involved in creating the ruckus. All mobile footage and CCTV cameras installed in and around the vicinity are being scanned to identify the culprits and trace them,” said Mr Pathak.

According to the first information report (FIR) filed at Jahangirpuri police station, at around 6 pm the Shobha Yatra procession was passing off peacefully but when they reached outside a mosque, a man, Anshar, came there with his associates and started arguing with the participants of the yatra.

The argument soon turned violent and both the sides started pelting stones at each other.

“Inspector Rajiv Ranjan Singh, tried to pacify the situation and separated the two groups, however, within some time, they again started pelting stones after which the inspector informed the police control room about the development,” reads the FIR.

According to the police, there was stone-pelting and arson during the clashes between the two communities. At least nine people, including eight policemen, were injured while one vehicle was torched and around five to six cars were vandalised in the clashes in Jahangirpuri Saturday evening. To contain the situation and disperse the crowd, the police fired 40-50 teargas shells.

“Some of the people forcibly entered the mosque and tried to install flags in the premises. They were threatening us with swords and even pelted stones. They were not from the area. Here everyone knows each other and we live in peace,” said Shamsad, who lives near the mosque.

Wahid, a resident of C Block, said people in the procession were carrying weapons, including guns, swords and sticks. A video of the incident, in which members of the yatra can be seen carrying swords and sticks, was also doing the rounds of the social media.

Mukesh, a shopkeeper from C Block near the mosque, said those who tried to disrupt the peace in the area must have been outsiders. “I have been living here for the last 35 years but have never seen such violence in this area. Hindus and Muslims live here peacefully. The people who were in the procession must be outsiders, and not Jahangirpuri locals,” Mukesh said.