Among the 48 passengers in the ill-fated bus, 42 are from Kerala. Condition of two injured persons is reported to be critical 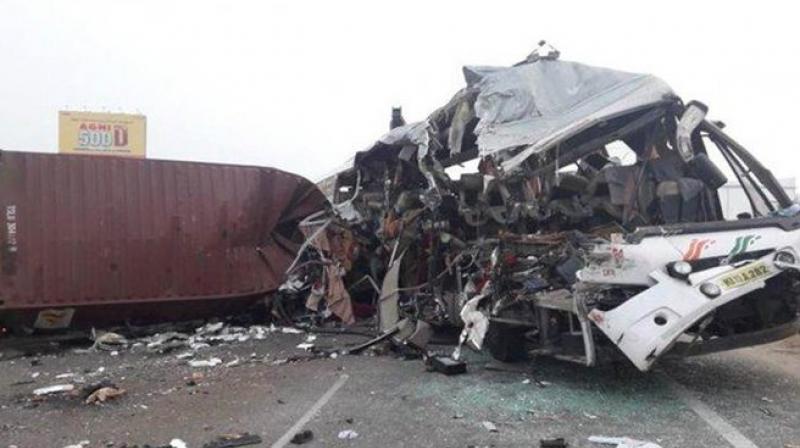 The Palakakd district collector has been instructed to coordinate relief measures. Steps are also being taken to ensure necessary emergency medical aid to the injured and to bring mortal remains of the victims.

The KSRTC has launched helpline number 94950 99910 to provide details of bus passengers.

Kerala police chief Lokanath Behera has asked the relatives of bus passengers to contact Palakkad SP to identify the bodies and to get details of those admitted in hospitals. Numbers are 9497996977, 9497990090, 9497962891. A team of Kerala police officials is camping at Avinashi. The Tamil Nadu DGP and Coimbatore city police commissioner have promised to complete post-mortem of the accident victims and other formalities at the earliest.

Six 108 ambulances have sent to Tirupur and Avinashi district hospitals to bring the injured. The district medical offices have arranged four ambulances at Palakkad and five ambulances at Thrissur.

Among the 48 passengers in the ill-fated bus, 42 are from Kerala. Condition of two injured persons is reported to be critical.

Ramachandra Menon from Kodungalloor, a passenger on board told a Malayalam daily that the truck coming from the opposite direction suddenly changed the lane and collided with the bus.

“Most of the passengers were sleeping and the bus was moving at high speed. The truck’s driver might have slept off which caused the mishap. All the front row seats were completely damaged. I am under observation in a hospital in Avinashi,” he said.