Ms Sharma in her petition, has sought direction to club all the FIRs registered against her across the country 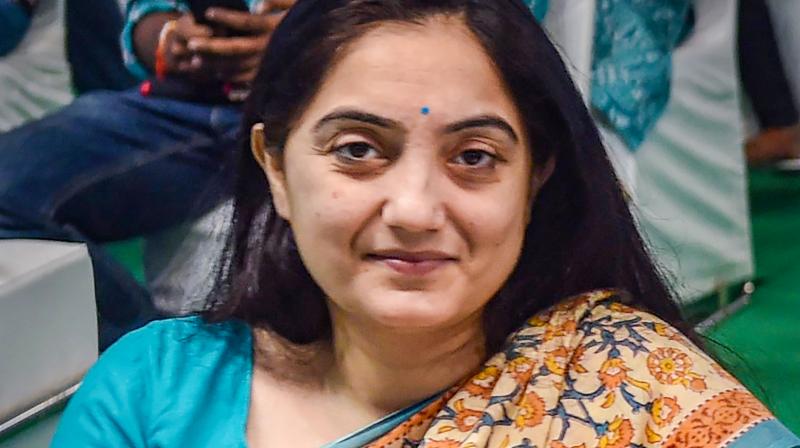 New Delhi: The Supreme Court on Tuesday protected suspended BJP spokesperson Nupur Sharma from arrest in multiple FIRs/complaints registered or may likely be registered against her across the country relating to her controversial remarks on Prophet Mohammed during the course of a television debate on June 26, 2022.

While protecting Ms Sharma from any coercive action by the police in different states, a bench of Justices Surya Kant and J.B. Pardiwala issued notice to the Centre and the states where FIRs have been filed and police have initiated action against her, seeking their responses on evolving a mechanism so that she could avail alternate legal remedies (approaching different high courts) without any apprehension or fear of threat to her life.

Issuing notice to the Centre and various states, the court in its order said, “Meanwhile, as an interim measure, no coercive action shall be taken against the petitioner (Ms Sharma).”

“In light of recent events, the concern of the court is as to how can the petitioner avail the alternate legal remedy. In order to explore the possibility, let notice be issued to the respondents. Matter posted for hearing on August 10. Copies of the main writ petition shall also be supplied to the Respondents”, the court said in its order today.

The court noted that Ms Sharma had approached the top court invoking its jurisdiction under Article 32 of the Constitution, seeking the quashing of all the FIRs filed against her in different states. Since the prayer for quashing of FIRs can be exercised by the high court in its power under the Code of Criminal Procedure, this court on July 1 had asked Ms Sharma to take recourse to the alternative remedy.

The court today noted that Ms Sharma has now approached it (the court) seeking the modification of the July 1 order, pointing out that it has become “nearly impossible for her to avail the alternative remedy granted by this court and that there is an imminent necessity for intervention by this court to protect her life and liberty as guaranteed under Article 21 of the Constitution.”

In support of her plea, the court noted that Ms Sharma has averred that after July 1 orders, various incidents, including threats calling for fatal physical harm to her have been made. Those include a video threat by Chisti, claiming to be a dargah khadim, calling for beheading and another video by an Uttar Pradesh resident using abusive language against her and threatening to decapitate her.

Ms Sharma in her petition, has sought direction to club all the FIRs registered against her across the country. She, in her application seeking modification of the July 1 order, has said that after strong criticism of her by the top court the fringe elements have renewed their threats to her life and also made rape threats.

Ms Sharma had urged the top court that since the first FIR against her was registered in Delhi, all the FIRs in other states may be clubbed with Delhi FIR and investigation in all of them be handed over to the Delhi police.

On July 1, the top court came down heavily on Ms Sharma and had said that “her loose tongue” has set the entire country on fire and she is single-handedly responsible for what is happening in the country and also for the gruesome murder of the Udaipur tailor.

Rejecting Ms Sharma’s request for the clubbing of all the FIRs registered against her in many states and entrusting the investigation in all of them to Delhi police, the court had observed, “She has threat or she has become security threat?”

Senior advocate Maninder Singh, appearing for Ms Sharma, had then withdrawn the plea.