Rajeev Kumar had on Monday approached the top court seeking an extension of time citing strike of lawyers in West Bengal. 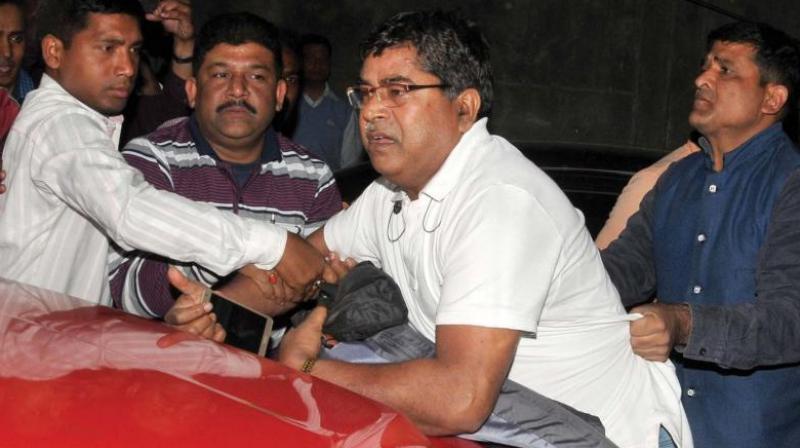 The CBI, in its plea, had sought permission for custodial interrogation of Kumar, who earlier headed the West Bengal police special investigation team (SIT) probing the chit fund scam, over his alleged role in destroying evidence in the case. (Photo: PTI)

New Delhi: The Supreme Court on Tuesday refused to set up special bench to hear former Kolkata Police Commissioner Rajeev Kumar's plea seeking extension of the seven-day period granted to him to approach a competent court after his protection from arrest was vacated in connection with the Saradha chit fund scam.

The matter was heard by Chief Justice of India Ranjan Gogoi.

Kumar had on Monday approached the apex court seeking an extension of the time citing strike of lawyers in West Bengal.

The Supreme Court had last week vacated the interim protection from arrest to Rajeev Kumar in the Saradha chit fund scam case but granted him seven days to approach a competent court to seek legal remedies.

A bench comprising Chief Justice Ranjan Gogoi and Justices Deepak Gupta and Sanjiv Khanna had said that the order should not be treated as a direction to the Central Bureau of Investigation (CBI) for custodial interrogation and asked the investigating agency to act as per law.

The CBI, in its plea, had sought permission for custodial interrogation of Kumar, who earlier headed the West Bengal police special investigation team (SIT) probing the chit fund scam, over his alleged role in destroying evidence in the case.

It had said that there was prima facie evidence against him of allegedly trying to "destroy or tamper with evidence and shield high and mighty" in the case. The agency had pleaded for withdrawal of the February 5 stay order.

The CBI had also argued that Kumar's custodial interrogation was required to probe the larger conspiracy to unravel the nexus between directors of Saradha Group and politicians besides his and other police officials' role in causing disappearance and destruction of evidence.

It had said that Kumar, who earlier appeared before CBI officials for questioning in Shillong as per the Supreme Court's order, remained elusive and evaded all pertinent questions and also did not assist the agency in making available crucial evidence in the chit fund cases.

The CBI had claimed Kumar has not disclosed any crucial information he was privy to.

An unprecedented chain of events unfolded on February 3 when a CBI team was detained by Kolkata Police when it reached Kumar's residence to question him. It was followed by West Bengal Chief Minister Mamata Banerjee's visit to the officer's home. The CBI officers were taken to a police station and later released.