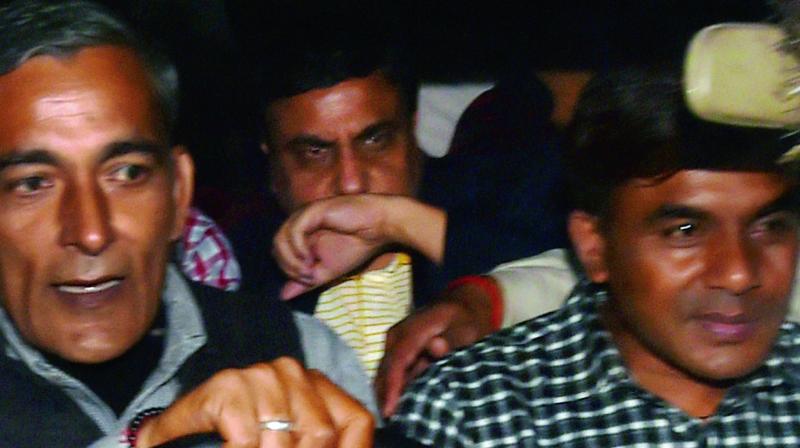 IAS officer B.L. Agrawal, who was arrested by the CBI in an alleged bribery case, is produced in Patiala House Courts in New Delhi on Tuesday. (Photo: PTI)

New Delhi: The CBI on Tuesday arrested two senior public servants, including the then joint director in Enforcement Directorate (ED), in two separate corruption cases. While J.P. Singh, the then JD (Ahmedabad-ED), who was facing the agency’s probe for allegedly receiving bribe from accused in IPL cricket-betting scam investigated by him, was arrested by the CBI, the agency sleuths nabbed senior IAS officer in Chhattisgarh government B.L. Agrawal on the charges of allegedly trying to buy favours in cases against him probed by the country’s premier investigative agency.

Singh, a 2000-batch Indian Revenue Service officer of the Customs and Excise wing, was arrested along with three others — Sanjay (enforcement officer), Vimal Aggarwal and Chandresh Patel. Immediately after registering a case in September 2015, the CBI had carried out searches at various places in Mumbai and registered a case against Singh in Ahmedabad. Singh was later repatriated to his parent cadre and is at present posted as Additional Commissioner (Customs and Excise Department) in the Northeast.

All the four were arrested here and produced before a designated court which granted them a transit remand till February 23 so that they can be produced before the CBI court in Ahmedabad. The CBI had earlier said in its FIR that “it has been alleged that certain officers of ED while investigating the cases of money laundering in betting and other such activities have allegedly demanded and accepted huge illegal gratification from the accused and suspect persons in the cases.”

In another case, senior Chhattisgarh IAS officer Agrawal was arrested by the CBI for allegedly trying to buy favours in cases against him probed by the agency.

Agrawal, now principal secretary in the state, was arrested by the CBI along with his brother-in-law Anand Agrawal from Raipur and an alleged middleman Bhagwan Singh from here, sources said.

They said that during searches, the CBI has recovered two kilograms of gold and Rs 39 lakh in cash from the alleged middleman. It is alleged that Agrawal, an IAS officer of 1988 batch, wanted to “settle” CBI probes against him which were registered in 2010 when he was the health secretary in the state government. He has been chargesheeted in one while probe is going on in the other case.