Joint commissioner of police (crime) Murlidhar Sharma said Raghib Parvez, 24, escaped to Dubai after the accident and returned on Wednesday. 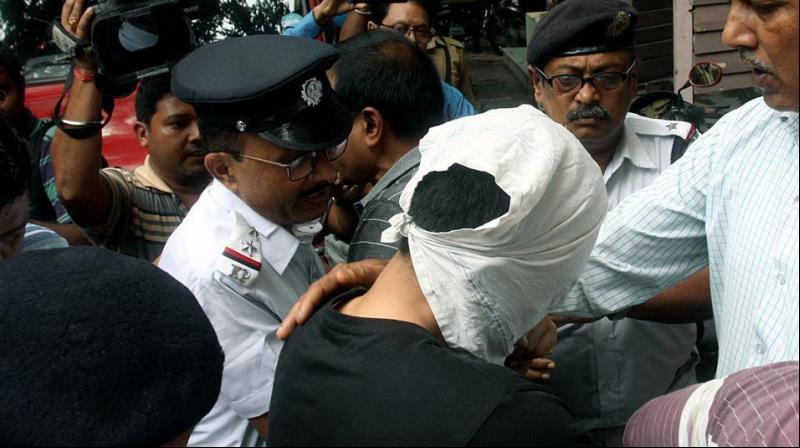 Kolkata: In an horiffying accident on August 16 and 17 that caused the death of two Bangladeshi nationals was being driven by Raghib Parvez, the elder son of Akhtar Parvez, owner of Arsalan, and not Arsalan Parvez, the younger son, Kolkata Police announced on Wednesday afternoon shortly after arresting the accused.

During the investigation, the police discovered that Raghib Parvez was the driver using the entertainment system of the vehicle he was driving (a Jaguar) and CCTV camera footage.

Joint commissioner of police (crime) Murlidhar Sharma said Raghib Parvez, 24, escaped to Dubai after the accident and returned to the city on Wednesday.

The case turned on its head when Raghib returned two days and got admitted to a nursing home near Park Circus. Police had by then enough reason to suspect that Arsalan was not speaking the truth.

“We cracked the case after going through the Jaguar’s infotainment and communication data in which the phone number of the person who drove the vehicle before the crash was recorded. That’s how we found Raghib’s number; we matched his social media profile photo with the footage recorded by security cameras at the crash site,” said Sharma.

Meanwhile, other footage showed Raghib Parvez entering the vehicle alone “at 11.30 pm on August 16 and driving out,” Sharma said.

However, it is not clear that why Arsalan Parvez, after whom the restaurant, famed nationwide for its biryani is named, confessed to having driven the car on August 17. We also arrested Mohammad Hamza, a maternal uncle of Raghib Parvez, on charges of giving shelter to the accused and helping him escape to Dubai,” said Sharma.

When police confronted Raghib on Wednesday afternoon, he did not resist. The facial burn marks and an elbow injury were consistent with the accident, an investigator said.

The dead identified as Kazi Mohammad Mainul Alam (36) and Farhana Islam Tania (28) were standing under the shed of the traffic post along with another Bangladeshi who is reported to have escaped with injuries in the impact.

They were taken to a Kolkata hospital, where they were declared dead on arrival.

A third Bangladeshi national –who escaped being hit by the car – said the couple was crushed against the wall of the police outpost.

Twenty-two-year-old accused, identified as Arsalan Parvez, the driver of the Jaguar from a prominent Kolkata family which runs a popular restaurant chain, Arsalan – reportedly fled the spot but was later arrested. The driver and the passenger of the Mercedes also got injured.

Although, Arsalan was arrested 10 hours after the crash. Police charged Arsalan under IPC sections 279 (rash driving), 304 part-II (culpable homicide not amounting to murder) and 308 (attempt to commit culpable homicide) apart from destruction of public property. Now that the police have made a new arrest the prosecution will frame fresh charges.