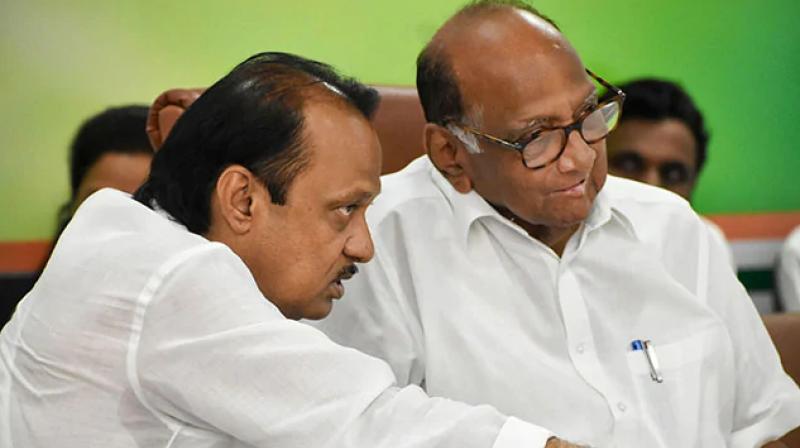 Ajit Pawar's decision to join hands with the BJP in an act of overnight rebellion bears a striking resemblance to his uncle Sharad Pawar's coup against a government formed by two Congress factions to become the state's youngest chief minister 41 years ago. (Photo: PTI)

New Delhi: Ajit Pawar's decision to join hands with the BJP in an act of overnight rebellion bears a striking resemblance to his uncle Sharad Pawar's coup against a government formed by two Congress factions to become the state's youngest chief minister 41 years ago.

In 1978, Sharad Pawar ran the rainbow coalition comprising the Janta Party and the Peasants Workers Party that lasted less than two years. Incidentally, this time he is trying to forge a similar alliance in the state by joining hands with the Congress and the Shiv Sena.

Ajit Pawar was made Deputy Chief Minister on Saturday morning, only to be snubbed by Sharad Pawar, who said the decision to support the BJP was not backed by him and was his nephew's personal one.

In fact, Sharad Pawar's decision in 1978 to establish his own party and run it for a decade earned him the unofficial title of "strongman" in political circles.

Sharad Pawar wrote in his book "On My Terms" that the poll reverses in the 1977 post-Emergency anti-Indira Gandhi wave shocked many in the state and the country. VN Gadgil lost on a Congress ticket in Baramati, the home turf of the Pawars.

In January 1978, former Prime Minister Indira Gandhi split the Congress, forming the Congress (Indira) to take on the parent organisation Congress(S), headed by Sardar Swarn Singh, in the state elections. Sharad Pawar stayed with Congress(S) and his mentor Yashwantrao Chavan.

In the assembly polls held a month later, the Congress(S) won 69 seats as against 65 of Congress(I). The Janta Party won 99 seats. However, no party got a full majority. The two factions of the Congress got together to form the government headed by Vasantdada Patil from Congress(S) and with Nashikrao Tirpude from Congress(I) as the Deputy Chief Minister.

However, the bickering between the two Congress factions continued which made it difficult to run the government.

Accordingly, Sharad Pawar started seeking support of the MLAs. Sushilkumar Shinde, who went on to become the hief minister and then Union Home Minister, Datta Meghe and Sundarrao Solanke sent their resignations to the chief minister.

Sharad Pawar walked out with 38 Congress MLAs to form a new government called Samantar Congress (Parallel Congress). He then became the youngest chief minister of the state at the age of 38.

"Even while the House was discussing supplementary demands, the government was reduced to a minority, following which chief minister Vasantdada Patil submitted his resignation," Sharad Pawar wrote.

However, with the return of Indira Gandhi to power in 1980, his government was dismissed.