The CBI arrested lawyer Sanjeev Punalekar and Vikram Bhave, a member of the Sanatan Sanstha, in Mumbai on Saturday. 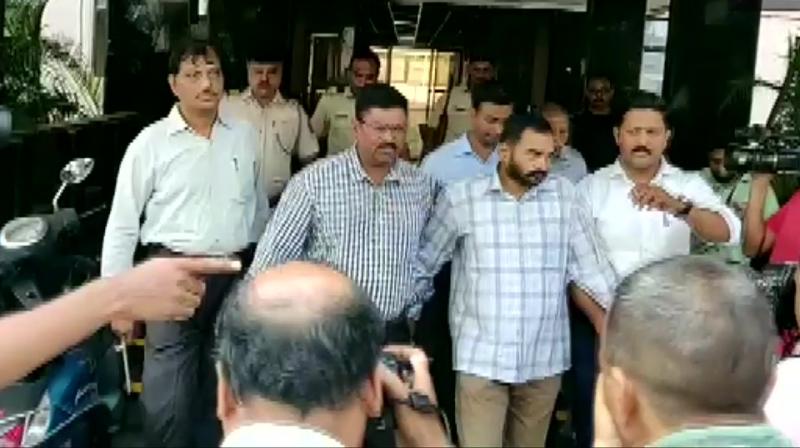 A lawyer and a right-wing activist arrested for allegedly helping in destruction of evidence in the Narendra Dabholkar murder case were sent to CBI custody till June 1 by a Pune court on Sunday. (Photo: Twitter/ ANI)

Pune: A lawyer and a right-wing activist arrested for allegedly helping in destruction of evidence in the Narendra Dabholkar murder case were sent to CBI custody till June 1 by a Pune court on Sunday.

The Central Bureau of Investigation (CBI) arrested lawyer Sanjeev Punalekar and Vikram Bhave, a member of the Sanatan Sanstha, in Mumbai on Saturday.

They were produced before the Pune-based court of Additional Sessions Judge S N Sonawane, who remanded them to the agency's custody till June 1 after hearing the arguments of the prosecution and the defence.

Dabholkar, an anti-superstition activist, was shot dead while he was out on morning walk in Pune on August 20, 2013. A preliminary probe has revealed that Punalekar and Bhave had links with the two alleged killers of Dabholkar and had also helped in destruction of evidence, apart from providing other assistance.

The CBI told the court on Sunday that Punalekar had allegedly asked Sharad Kalaskar, one of the shooters arrested in the case, to destroy the weapons used in the killing of Dabholkar and journalist Gauri Lankesh.

It also said Bhave had allegedly assisted the shooters and conducted a reconnaissance of the spot, where Dabholkar was shot at. Bhave, a convict in the 2008 Gadkari Rangayatan blast case, was out on bail.

After his release on bail, he had penned a book in Marathi, titled "Malegaon Sphotamagil Adrushya Haat" (The invisible hand behind the Malegaon blast). It is suspected that it was Bhave who had identified Dabholkar to the shooters, a CBI official said on Saturday.

So far, six people, including Sanatan Sanstha member and ENT surgeon Virendrasinh Tawde, Sachin Andure and Kalaskar, have been arrested by the CBI in the case.

The central agency had earlier claimed that Tawde was the "mastermind" of the conspiracy to kill Dabholkar and veteran Communist Party of India (CPI) leader and rationalist Govind Pansare. Pansare was killed in Kolhapur, Maharashtra in February, 2015.

The CBI had claimed that Andure and Kalaskar had shot Dabholkar dead. The agency has also arrested Rajesh Bangera, Amol Kale and Amit Digvekar in connection with the alleged conspiracy.

Bangera and Kale are also accused in the Gauri Lankesh murder case. Lankesh was shot dead in Bengaluru on September 5, 2017.