Clashes with security forces have erupted in several parts of the Valley including old town of Baramulla and neighbouring Palhalan township. 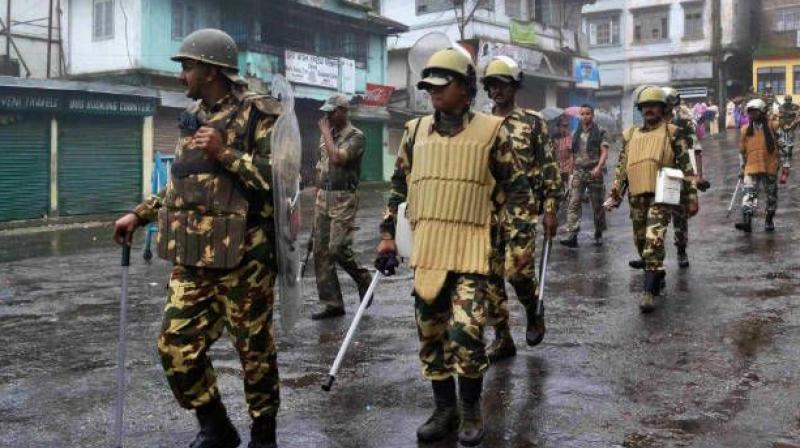 Srinagar: Amid simmering anger fuelled by the killing of three local youth in security forces’ firing a day ago, a complete shutdown is being observed in most parts of Kashmir Valley on Wednesday. Thousands of mourners attended multiple funerals of the slain youth in the central district of Budgam and took pledge to “fight till the last man” for the cause of “freedom”.

Separately, a large crowd turned up at the funeral of outlawed Lashkar-e-Taiba commander Tauseef Ahmed Wagay in Yaripora village of southern Kulgam district. The chants of “we want freedom” and “Mujahido hum tumhare saath hain” (we’re with you, holy fighters) filled the air, said the witnesses. Soon after the funeral, massive clashes erupted between protesters and the security forces, reports said.

Wagay was killed in a 10-hour-long gun battle with the security forces after he was trapped inside a private house at Durbug in Budgam’s Chadoora area during a cordon-and-search operation on Monday night. As the fighting raged during the operation in which Army’s 53 Rashtriya Rifles, local police’s counterinsurgency Special Operations Group (SOG) and the CRPF took part, surging crowds chanting pro-freedom and anti-India slogans marched near the area apparently in an attempt to help the trapped militant escape.

The security forces fired live ammunition against what they alleged were “stone-pelting” mobs. Over thirty people sustained injuries in the firing on the protesters. Three of the injured Zahid Rashid Ganaie, Saqib Ahmed Butt and Ashfaq Ahmed died on way to hospital.

CRPF Deputy Inspector General (DIG), Dr Sanjay Kumar, said that the obstruction by the locals made their operation against the holed up militant even more difficult as they were forced to divert their attention from him. He said that as many 43 CRPF personnel and twenty of those from the Indian Kashmir police were injured in the stone pelting.

The mainstream opposition parties and separatists, however, questioned his claim and accused the security forces of using disproportionate force against “unarmed protesters”. They said the charge can be substantiated from the videos and photographs showing the security forces firing on unarmed fleeing youth near the encounter site.

On Wednesday, shops and other businesses and educational institutions remained closed across the Valley while traffic was off the roads. The authorities fanned out thousands of additional security personnel across the small and major towns including summer capital Srinagar as part of beefed up security arrangement.

The Kashmir University, the Islamic University of Science and Technology and the Central University of Kashmir have postponed all examinations scheduled for Wednesday. The rail services too were suspended in the Valley in view of the strike call made by the ‘joint resistance leadership’ comprising Syed Ali Shah Geelani, Mirwaiz Umar Farooq and Muhammad Yasin Malik. It has also called for valley-wide protest demonstrations on Friday.

While most of the separatist leaders including Geelani and the Mirwaiz were already under house arrest and Malik was shifted to Srinagar’s Central prison after his arrest earlier this month, the police overnight detained dozens of activists.

Meanwhile, clashes between protesters and security forces have erupted in several parts of the Valley including old town of Baramulla and neighbouring Palhalan township.