Police lodged FIR Mahesh Singh’s complaint, husband of Pushpa Singh, one of the two aunts of Unnao rape victim, who died in the mishap. 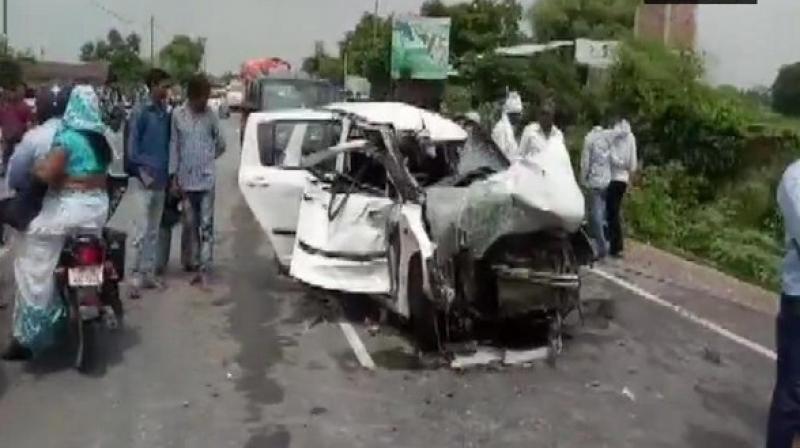 The case has been registered under Sections 302 (murder), 307 (attempt to murder), 506 (criminal intimidation), and 120-B (punishment for criminal conspiracy) of the Indian Penal Code (IPC). (Photo: ANI)

Raebareli: Police on Monday registered a murder case against BJP MLA Kuldeep Singh Sengar, his brother Manoj Singh Sengar and eight others in connection with the road accident in which the Unnao rape victim and her lawyer were seriously injured, while two of her aunts were killed.

The case has been registered under Sections 302 (murder), 307 (attempt to murder), 506 (criminal intimidation), and 120-B (punishment for criminal conspiracy) of the Indian Penal Code (IPC).

Police lodged the FIR on the complaint of Mahesh Singh, the husband of Pushpa Singh, who died in the mishap along with another aunt of the Unnao rape victim. She and her lawyer were critically injured and are currently under treatment at a hospital in Lucknow.

The FIR has been registered at Gurubaksganj police station here.

In the FIR, Mahesh Singh has stated that "we used to get threats from Kuldeep Singh Sengar, Manoj Singh Sengar, Vinod Mishra, Haripal Singh, Naveen Singh, Komal Singh, and some 15-20 others."

"They used to tell us that we should take the court case back or we will be killed. They used to say that if I want to see my family alive and safe, we should apologise to the minister and take back the case."

"They used to say that Unnao ASP Ram Lal Verma was shot dead by the minister's brother Atul Singh, and nobody did anything. So what will you do? I believe that this has been done by the minister with the intention of killing my family," he has stated in the FIR.

Earlier in the day, police said that the case would be transferred to the Central Bureau of Investigation (CBI).

Additional Director General of Police (ADG) Rajeev Krishna told reporters in Lucknow that a case has been registered in the matter on the basis of the complaint of the uncle of the victim, who has also requested for the matter to be transferred to the CBI.

"The case is being registered on the complaint of Mahesh Singh, uncle of Unnao rape victim. He has also requested for the transfer of this case to the CBI. We are getting a report on that request. As soon as that report comes, it will be recommended to the CBI," he said.

Police have also informed that they are probing the mobile numbers of the driver of the truck which collided with the vehicle carrying Unnao rape victim, her family members, and lawyer.

"We are investigating if the numbers of driver, cleaner and owner (of the truck) match with known numbers of Kuldeep Singh Sengar, accused in Unnao rape case, and his associates," Krishna.

He added that the police have arrested the owner, driver, and cleaner of the truck which was involved in the accident. The forensic team also reached the spot of the accident in Raebareli and has begun its investigation.

"The victim and her family members told me that the vehicle is a small one and it will be difficult to accommodate one more person. They asked me to stay back and said there will be no hassles as they are returning before evening," he said.

The accident took place on Sunday when the victim was on her way to Raebareli from Unnao. The vehicle in which she, her two aunts and lawyer were travelling collided with a truck.

While the two of the victim's aunts succumbed after the accident, she and her lawyer are grievously injured.

BJP MLA Sengar is the prime accused in the rape case of the minor girl. He is a BJP MLA from Bangarmau in Unnao and was arrested by the CBI in April last year. The teen was allegedly raped by the BJP MLA at his residence in Unnao on June 4, 2017, where she had gone to seek a job.

The Unnao rape victim and her lawyer are being treated at the Trauma Centre of Lucknow's King George's Medical University and Hospital.

"The lady (rape survivor) and lawyer are on ventilator and in a critical but stable condition. The girl has a fracture on her leg and a head injury," said Sandeep Tiwari, media in-charge of the hospital.

The Lucknow District Administration has said the state government will bear all medical expenses for the treatment of both the injured.