The family was explained by the CBI that shifting the trial was not under agency's jurisdiction. 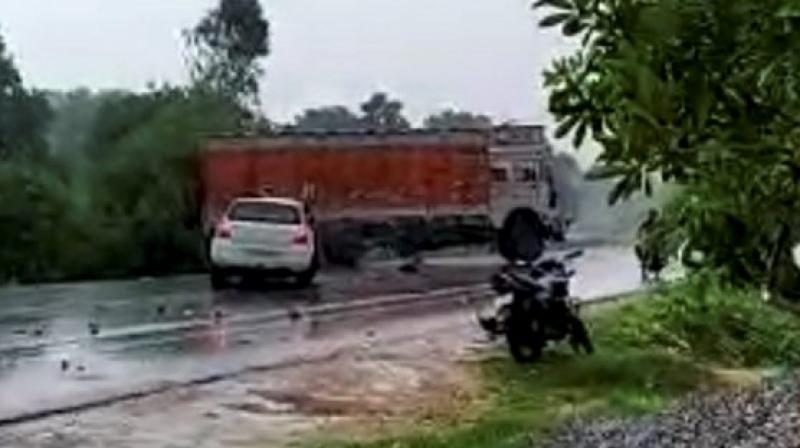 The car in which Unnao woman who had accused BJP MLA Kuldeep Sengar of raping her, was travelling during its collision with a truck near Raebareli. (Photo: PTI)

Lucknow: In last month, the Central Bureau of Investigation (CBI) was requested by the Unnao rape survivor and her family to transfer the trial to Delhi as they feared attack by the aides of BJP MLA Kuldeep Singh Sengar, ThePrint reported.

The family was explained by the CBI that shifting the trial was not under agency's jurisdiction.

The survivor was critically injured in a road accident when the car in which she was travelling got hit by a truck on Sunday evening which killed two of her aunts.

Her lawyer, who was on the wheels, also sustained serious injuries and continues to be critical. According to police, the truck was coming from the wrong side and hit the car head-on.

“The survivor and her family have been given sufficient security, with seven personnel stationed at her residence and three attached to her at all times,” ThePrint quoted a source. “The family did not approach CBI for more protection but was not comfortable with the trial in UP.”

The case is under investigation of CBI’s Lucknow unit and also being aided by the Special Crime Unit. The investigating agency has sought a report from the Uttar Pradesh police in the incident.

The CBI has filed four FIR’s in this case. One case was registered for raping a minor, the second FIR concerned the custodial death of woman’s father, the third case was filed on a cross-complaint by the MLA’s brother alleging assault by the woman’s relatives and the fourth case concerned gang-raped by three men including the son of Sengar’s associate, Shashi Singh.

The CBI has filed chargesheets in the first two cases. Sengar and a woman have been booked under criminal conspiracy, kidnapping, criminal intimidation and sections of POCSO (Protection of Children from Sexual Offences).

In the second chargesheet, Sengar has not been named but his brother Atul Singh Sengar has been accused. The role of Kuldeep Sengar is being investigated.

The survivor’s family had accused the two former superintendents of police of Unnao, Neha Pandey and Pushpanjali Devi, of helping the BJP MLA and his aides in the killing her father, ThePrint reported.

What if the victim succumbs to the injuries?

Senior criminal lawyers have said that in case of victim’s death, the case will have no relevance. The survivor’s statement was recorded by a judicial magistrate under section 164 CrPC and also by the CBI, but according to counsels, the said statement is just “corroborative and cannot be used as evidence”.

“In the case of Nirbhaya, the death was the consequence of rape,” a senior lawyer said. “In this case, however, these are two separate incidents and that too with a considerable time gap. In this scenario, if the rape survivor is unable to pull through, the case will not stand in court.”

“Unless a link is established and is proven that her death was a conspiracy by the accused, it will be difficult to present a strong case in the court in the rape survivor’s absence,” the lawyer added.

In the rape case against Sengar, the CBI’s chargesheet has been filed on the basis of the survivor’s testimony. Although in jail, he still remains a BJP MLA.