The provisions of the UAPA that have been filed against the accused are sections 16, 18 and 20 that relate to a terrorist act 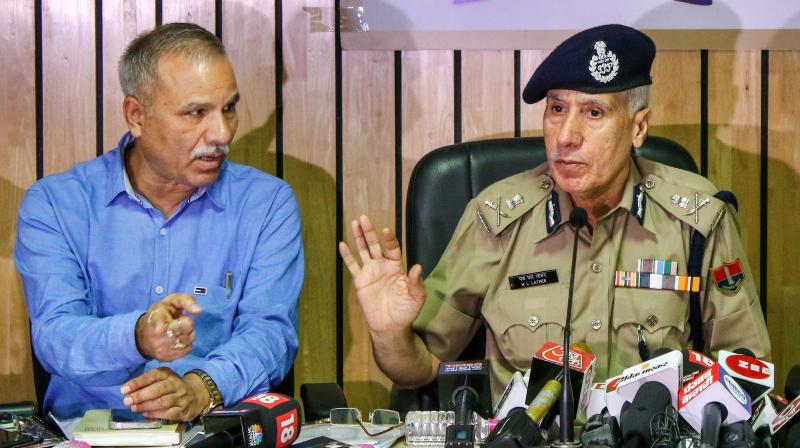 New Delhi: The National Security Agency (NIA) on Wednesday took over the investigation into the beheading of tailor Kanhaiya Lal Teli in Udaipur, filing a case under terror law, the Unlawful Activities (Prevention) Act (UAPA), as well as invoking several sections of the Indian Penal Code against the main accused, Riyaz Attari and Ghous Mohammad. The provisions of the UAPA that have been filed against the accused are sections 16, 18 and 20 that relate to a terrorist act, conspiring to commit a terror act and being member of a terrorist gang or organisation.

Teli was brutally killed by two Muslim men on Tuesday, allegedly for his tweets in support of the now-suspended BJP spokesperson, Nupur Sharma, facing uproar over her remarks against Prophet Mohammad.

The accused videotaped the murder and then threatened Prime Minister Narendra Modi too. The government is viewing the beheading as an act of terror and is investigating if this incident has cross border connection.

Teli was on Wednesday cremated in his native village, where his wife and son demanded stringent punishment for the men who killed him.

The state witnessed protests in Bhim, Rajsamand, over the Udaipur murder. Police resorted to aerial firing and baton charge to stop protesters from heading to sensitive areas. The protestors resorted to stone-pelting, during which one constable was injured.

The security agencies believe that one of the two Muslim men who killed the tailor in Udaipur allegedly has links with Pakistan-based Islamic organisation Dawat-e-Islami and Barelvi extremist group Tehreek-e-Labbaik and had visited Karachi in 2014. Pakistan has refuted the charge.

The Union home ministry had rushed a team of NIA officials to Udaipur on Tuesday itself but a formal case was registered by the central agency on Wednesday. At present, the Rajasthan police are investigating the murder and have so far arrested the two main accused, along with three others, with whom the two prime accused were in touch before the crime.

"Ministry of home affairs has directed the NIA to take over the investigation of the brutal murder of Shri Kanhaiya Lal Teli committed at Udaipur, Rajasthan yesterday. The involvement of any organisation and international links will be thoroughly investigated," Union home minister Amit Shah’s office said.

"NIA has re-registered a case under sections 452, 302, 153(A), 153(B), 295(A) and 34 of IPC and sections 16, 18 & 20 of UA(P) Act, 1967 against accused who have conspired, planned and committed the heinous murder of Shri Kanhaiya Lal Telli on June 28 in Udaipur, Rajasthan. The case was initially registered as FIR No- 81/2022 PS -- Dhanmandi district -- Udaipur, Rajasthan on June 29 pertaining to the murder of Shri Kanhaiyya Lal Teli on June 28 by two accused who had inflicted multiple injuries to the victim with sharp weapons. The accused persons had also circulated a video of the criminal act in the social media claiming responsibility for the murder in order to trigger panic and strike terror among the masses across the country. NIA has re-registered the case today… Pursuant to the registration of the case, NIA teams have already reached Udaipur and requisite action for expeditious investigation of the case has already been initiated," NIA said in a statement.

According to Rajasthan DGP M.L. Lather, "The main accused were in touch with Dawat-e-Islami. One of them also went to Karachi, Pakistan in 2014 to meet the organisation. We are considering this as an act of terror. The case has been transferred to the NIA and the state police will assist in the probe."

He added the ASI and SHO of the concerned police station where Teli had approached fearing a threat to his life have been suspended as they didn't take the required action to calm down the already polarised situation in the area of the victim before this incident happened.

Rajasthan chief minister Ashok Gehlot announced to give out-of-term promotion to the five policemen who made quick arrests of the accused. Mr Gehlot has called an all-party meet in Jaipur over the incident.

On their part, Pakistan said that linking the accused of this beheading to an organisation in Pakistan is highly "mischievous". "We categorically reject any such insinuations, which are typical of the BJP-RSS ‘Hindutva’ driven Indian regime’s attempts at maligning Pakistan, including by externalising their internal issues through pointing fingers towards Pakistan. Such malicious attempts will not succeed in misleading the people, either in India or abroad," said Pakistan foreign office.

Meanwhile, Shahi Imam of Delhi's Jama Masjid, Syed Ahmed Bukhari, condemned the beheading, saying, "The brutal murder in Udaipur has shaken humanity... It's not only an act of cowardice but also non-Islamic, illegal, and inhuman. On behalf of all Indian Muslims, I strongly condemn this."

Jamaat-e-Islami Hind too condemned the murder, saying "There is no room for justification for such violence in Islam… The government must stop mischief-makers from taking advantage of this incident to create social unrest… The statements being issued by some political leaders show their immaturity and their ugly intention to play vote bank politics."

However, the BJP and Congress continued to blame each other. While BJP leaders blamed the failure of the Congress-led Rajasthan administration for acting in time, Congress leaders said Mr Gehlot government acted swiftly to nab the accused.

"We all condemn the Udaipur incident. Rajasthan CM took swift action and the culprits were nabbed within 2-3 hours. This is further proof that the Rajasthan government is vigilant and maintaining law and order, so it is not okay to demoralise them," said Congress leader Mallikarjun Kharge.

He added that not just in Rajasthan, but similar cases have been reported from BJP-governed states like Uttar Pradesh and Assam. "Prime Minister and home minister should break their silence. The PM should appeal to the people that they do not engage in such incidents. People should not engage in provocative hate speeches too," Mr Kharge added.