The accused had succeeded in securing 99.8 percent in the exam 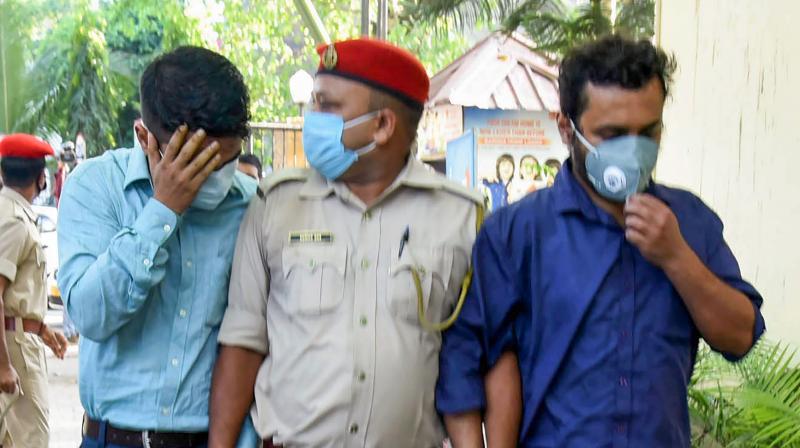 Accuseds arrested in connection with the recent JEE (Main) examination scam, being produced in a court, in Guwahati, Thursday, Oct. 29, 2020. (PTI)

Guwahati: In what has come as a shocker, the topper of the Joint Entrance Exam (Mains) in Assam, his father and three others were arrested by the city police here on Thursday on charges of using a proxy to write the country's premier engineering entrance test. The accused had succeeded in securing 99.8 percent in the exam, which is the basis for admission in India's top engineering colleges, including the prestigious IITs.

Police said that they have arrested the candidate, Neel Nakshatra Das, his father, Dr Jyotirmoy Das, and three employees of a testing centre - Hamendra Nath Sarma, Pranjal Kalita and Hirulal Pathak. They have been produced in a local court.

The Guwahati Police Commissioner M P Gupta told reporters, “An FIR has been registered with the Azara Police against the topper of the Joint Entrance Examination (JEE) Mains in Assam, allegedly for using a proxy to appear in the examination on his behalf. We investigated the case and have found that a proxy was used by the candidate through the help of another agency that acted as a middleman.”

Admitting that this could be a major racket and chances of many others also having resorted to such practice can’t be ruled out, police said, “We are looking into all the aspects. The staff of the testing centre in Guwahati is also involved. We are searching for more people who are suspected to be the part of this crime. This might not be a one-of case but may be part of a larger racket.”

Police said that the entire racket came to light on social media after a phone call recording and WhatsApp chat - in which the accused allegedly spoke about having used unfair means to top the exam - went viral. Referring to the social media post, a man Mitradev Sharma lodged a police complaint in this regard.

Police said that the invigilator had allegedly helped the JEE aspirant in cheating. The accused went inside the online testing centre on the day of the exam just to fill his name and roll number on the answer sheet, police said, adding the test was written by a proxy outside. The arrest of JEE aspirant has raised serious questions over the JEE exam conducted at all India level.