In one of the biggest drugs haul, an Indian Coast Guard (ICG) ship seized 1,500 kgs of heroin valued at about Rs 3,500 crore. 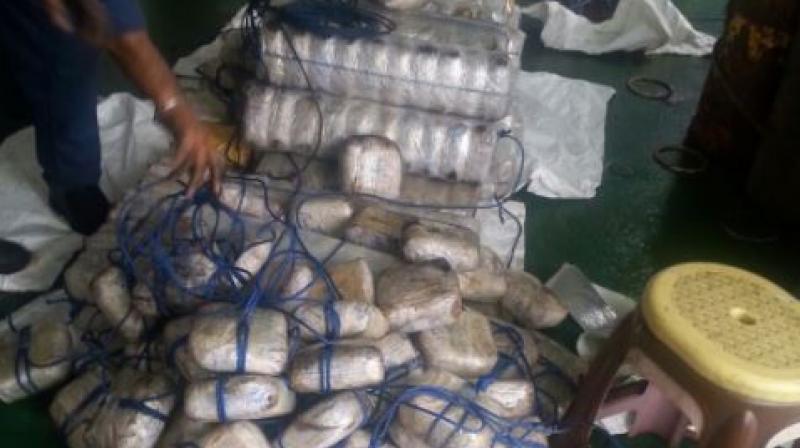 An ICG Ship apprehended Merchant Vessel carrying approximately 1500 kgs of heroine valued at about ₹3500 Cr off the coast of Gujarat. (Photo: ANI)

Ahmedabad: The Gujarat Anti Terrorist Squad (ATS) on Monday detained three persons in connection with the seizure of 1,500 kgs of heroin valued at about Rs 3,500 crore from a merchant vessel off the Gujarat coast on Sunday.

Though the vessel, identified as 'Hennry', claimed to have set sail from Iran and headed to Gujarat, the ATS is not ruling out the possibility that the contraband was loaded at a port in Pakistan before starting its journey towards Gujarat coast.

"Based on the (satellite) call details of the crew, we have detained three persons for questioning. They were picked up from different locations," said a senior ATS official.

"Though the boat claimed to have set sail from Iran, there is a possibility that the heroin was loaded at a port in Pakistan," he added.

In one of the biggest drugs haul, an Indian Coast Guard (ICG) ship seized 1,500 kgs of heroin valued at about Rs 3,500 crore from a Panama-registered merchant vessel off the Gujarat coast on Sunday, said a release by the Defence PRO.

After the seizure of the boat and heroin, various agencies such as the ATS and the Narcotics Control Bureau (NCB) swung into action and started their investigation.

The ATS official said that all the eight crew members on board the vessel are from either Bihar or Uttar Pradesh.

While talking to mediapersons at Porbandar on Sunday, Commodore Rakesh Pal of the Indian Coast Guard (ICG) said two satellite phones were also recovered from the eight crew members, who are now undergoing joint interrogation at Porbandar.

"We have extracted call data from one of the seized satellite phones and given that data to various agencies such as ATS and NCB for further action," he said.

During primary investigation by the ICG, it was revealed that though the vessel was registered in Panama as "Hennry", the crew was transmitting its identity as Prince II, the release said.

The vessel was intercepted at around midnight on July 29 and taken to Porbandar port on Sunday for further investigation, it said.

Security agencies are trying to find out who in India was to take the delivery of the contraband.