BJP confident of ties with Rajini, a natural ally

When Rajini talks about honesty in politics, good governance and spiritual politics, then he is a natural ally of the BJP. 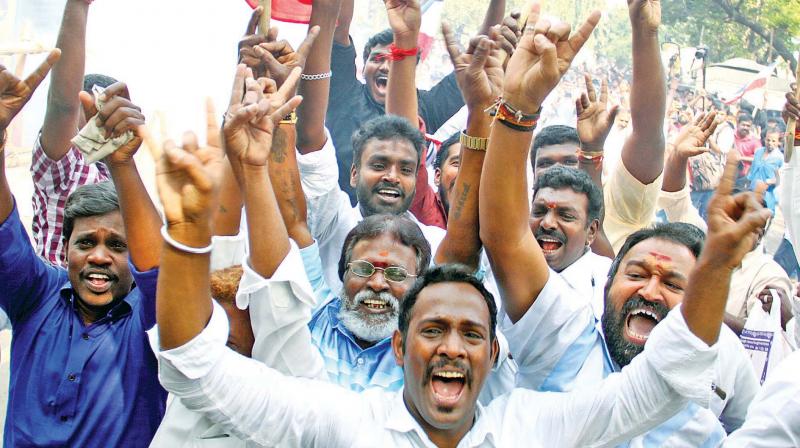 Chennai: To the BJP, which has been waging a protracted battle against the Dravidian majors in Tamil Nadu, nothing would have been more pleasant than the 'superstar's' New Year 'gift.' More than his hundreds of jubilant fans, the BJP is ecstatic over the prospects of an alliance with the Kabali-fame Rajinikanth.

As some television channels lapped up his famous one-liner from Kabali - naan vanthuten nu sollu, thirumbi vanthuten nu, to signify his entry into politics, BJP state president Dr Tamilisai Soundararajan expressed the prevailing mood in her party. "I have already welcomed his move to enter politics and he has already announced that he will contest all the seats in the 2021 elections…naturally he should support the BJP because his aim of entering politics is to follow non-corrupt politics,” she said and claimed the alliance would be “natural.”

Even during the run up to the 2016 Assembly election, the BJP which took on both the AIADMK and the DMK, desperately wanted the 'superstar' to lend his support to it. Whenever the national leaders visited TN, they made it a point to meet Rajini. Before commencing his election tour of TN in 2014, Prime Minister Narendra Modi called on the veteran actor at his residence and early this while contesting in the by-election to the RK. Nagar Assembly constituency in the city, party candidate and renowned Tamil film music director Gangai Amaran, called on the 'superstar.' The latest to call on him was Poonam Mahajan, BJP Yuva Morcha national president. “He is welcome in politics and it is my request to him to think about BJP. There is an appropriate place for him in the BJP,” Union shipping minister Nitin Gadkari had said earlier, while party chief Amit Shah too welcomed the 'superstar' joining the BJP.

“Rajini should support the BJP as even our Prime Minister follows non-corruption in politics,” Dr. Tamilisai added and exuded confidence that an alliance will fructify.

“When Rajini talks about honesty in politics, good governance and spiritual politics, then he is a natural ally of the BJP. I am afraid his core principle will not make the DMK or Congress make overtures nor will the AIADMK relish his criticism on corruption issues,” claims BJP senior M. Chakravarthy.

Though much delayed, his decision is good, Mr. Chakravarthy said and claimed that the actor would gauge his strength before striking a pact with the BJP. “We are more than willing to accept him as chief ministerial candidate in the next Assembly election, as he is not only a mass leader but also a winnable leader,” he added.