Challenges, rough ride ahead for Rajinikanth in politics

Political analysts said the main challenge before Rajinikanth was to build the party infrastructure from the scratch. 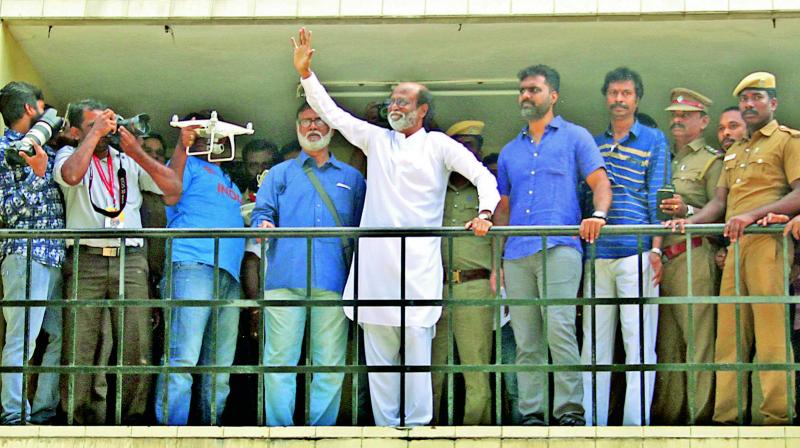 Rajinikanth waves to his fans in Chennai. (Photo: Asian Age)

Chennai: Rajinikanth's rise from a bus conductor to a versatile actor and then the Superstar of the Tamil filmdom was quick and dazzling, but his brush with politics, that is quite rustic in nature, is expected to be no less of a roller coaster ride for which the legendary actor needs to display lot of patience and endurance.

The 68-year-old star, who commands a cult following among millions of his fans among Tamil-speaking population across the world, could have replaced the engine of cinema with politics in 1996 when the entire Tamil Nadu was looking for an “alternative” following a five-year rule laced with corruption, nepotism and above all flamboyance of worst kind by late J Jayalalithaa.

Twenty-one years later after he missed the clarion call to take charge of the political space in April 1996, the ever-reluctant Rajinikanth has finally swollen the pill - whether it is bitter or sweet is anyone's guess — at a time when his fan base is not as strong as that was two decades back and electorate who appears reluctant to back him.

And in 2017, the Tamil Nadu's political scene is much fragmented with several players - caste parties, Tamil nationalistic outfits and even fringe elements - dotting, making it more difficult for him to ascend throne at Fort St George, the seat of the Tamil Nadu Government. One thing that could go in the star's favour is the young voters' yearning for a change - he could cash in on the “leadership vacuum” but his widely suspected infatuation with the BJP could play the spoilsport.

Political analysts said the main challenge before Rajinikanth was to build the party infrastructure from the scratch and to channel his views on almost every issue. He will come under the scanner on what he says about Tamil Nadu's water wars with neighbours - especially the Cauvery water row with Karnataka, a state where he was born and raised.

Much water has flown under the bridge since 1996 when his television interviews endorsing the then Dravida Munnetra Kazhagam-Tamil Maanila Congress alliance and his open bashing of Jayalalithaa, calling her “corrupt” catapulted him to the status of Tamil Nadu's king maker. The magical Rajinikanth wave even washed away Jayalalithaa in her Bargur constituency and her arch-rival M. Karunanidhi rode to Fort St. George yet again for the fourth time.

Rajinikanth's invincibility did not last long for his appeal to again vote for the DMK-TMC alliance in 1998 Lok Sabha polls under the shadow of a bomb blast in Coimbatore bombed at the hustings and in 2004, his appeal was washed away in the tsunami that drowned the AIADMK. He had asked his fans to vote out the PMK, with which he had a running battle then, in the polls, but the regional party, which was part of the DMK alliance, managed to win all parliamentary seats that it contested.

Prof Ramu Manivannan, head of the Department of Political Science and Public Administration at the University of Madras, told DC that Rajinikanth has no political work to show and he is entering politics only in the hope that his image as superstar of film industry will alone see him through in politics.

“It is no secret that he enjoys the support of the BJP which is the ruling party at the Centre. He is neither socially nor politically engaged and he is of the hope that his fan club will be translated into political party. I think the actor is challenging himself and now all his films will come under close scrutiny of the people and the civil society,” Manivannan said.

R Kannan, who penned the biographies of Dravidian legend C.N. Annadurai and AIADMK founder MG Ramachandran, says Rajinikanth, who was a private person hitherto, faces several challenges. “The huge indulgence that he has enjoyed till now will be put to risk with his personal and professional life coming for close scrutiny,” Kannan said.

Manivannan said Rajinikanth was taking a calculated risk and he will be challenged by many, many people in his pursuit to make it big in politics.

Vijayakant, DMDK founder: Known as 'Captain' for his brave roles in reel life, Vijayakant shifted gears from cinema to politics in 2005, just a year ahead of the assembly elections, in the hope of recreating history - emulating MGR. But, his stellar performance in action films earned him just one seat - Viruthachalam where he was his party's candidate - though his outfit could muster 10 per cent of the votes. More than playing the hero role, his party could just perform the role of character artiste - at best his DMDK was a spoiler for AIADMK for two elections - but slowly he lost his steam. The end, albeit for now, came in 2016 when he not just lost his seat in Ulundurpet but also forfeited his deposit

Sarath Kumar, AISMK founder: Considered close to J Jayalalithaa's AIADMK in the early 1990s, jumped the ship to DMK which fielded him as its Lok Sabha candidate from Tirunelveli in 1998. Sarath Kumar, one of the leading actors then, could not win the seat but he managed to get a Rajya Sabha posting in 201. However, his frequent changing of parties earned him the tag of a turncoat. After several failed innings with the DMK and AIADMK, the actor finally launched his own outfit, All India Samathuva Makkal Katchi, in 2011. However, he aligned with AIADMK and won as MLA from Tenkasi. From his aim to make it big in politics, Sarath Kumar has been reduced to a fringe force in Tamil Nadu.

Tamil Film world’s brush with politics
Superstar Rajinikanth is not the first one from the tinsel town to try his luck in politics. In a state like Tamil Nadu, where film industry and politics are inter-twined, it all began with M Karunanidhi lending wings to the Dravidian dream of capturing the Fort St George through his hard-hitting and powerful dialogues in films, followed by the highly successful M G Ramachandran and his lady luck in several movies J Jayalalithaa. While the trio succeeded in politics by dominating the political scape of Tamil Nadu, there are many who failed. Deccan Chronicle takes a look at prominent film personalities who took a plunge in politics

M. Karunanidhi,
DMK chief and five-time CM
M Karunanidhi, the powerful scriptwriter who gave voice to the legendary Sivaji Ganesan’s authoritative expressions and acting in Parasakthi, had his roots in the Dravidian movement. From being one of the prominent writers in the tinsel town, he rose to become one of the towering personalities of the DMK. When his leader C N Annadurai died in 1969 after being in power for just two years, Karunanidhi stepped into his large shoes and replaced him as the chief minister. From then, there was looking back for Karunanidhi, who was at the helm of party-led governments in 1971, 1989, 1996 and 2006

M.G. Ramachandran,
AIADMK founder and three-time chief minister
The first Super Star of the Tamil cinema world, M G Ramachandran, was the only filmmaker in India who could recreate his stupendous success that he tasted in cinema in the world of politics, which is always not a bed of roses, as well. His popularity and connect with the masses was so such that no leader, including his friend-turned-political foe M Karunanidhi, could never ever dream of even coming within sniffing distance of attaining the throne as long as he was alive. He ruled Tamil Nadu for three consecutive terms – 1997, 1980 and 1984 – he died in December 1987 after which the state plunged into a political crisis. MGR had his political schooling in the DMK under the aegis of legendary C N Annadurai, but he did not embrace rationalism in its full form – the leader was a devout Hindu and was a regular at the Moogambika Temple in Kollur in Karnataka

J. Jayalalithaa,
AIADMK leader and six-time chief minister
Queen Bee of Tamil film industry who held in awe her co-stars and audience alike by her sensuous looks and mesmerizing performance and scripted a howling success in the rough and tumble of politics that was traditionally dominated only by men. Such was Jayaram Jayalalithaa’s charisma that ensured she remained “The Empress” in every field that she touched – be it cinema or politics. She was indeed an unconventional politician who carved a niche for herself in Tamil Nadu and created ripples in the national political circle by keeping on tenterhooks even the traditional parties that had ruled the country. Though she scripted history by returning to power for a second straight term in 2016, her life was brutally cut shot in the end of the year