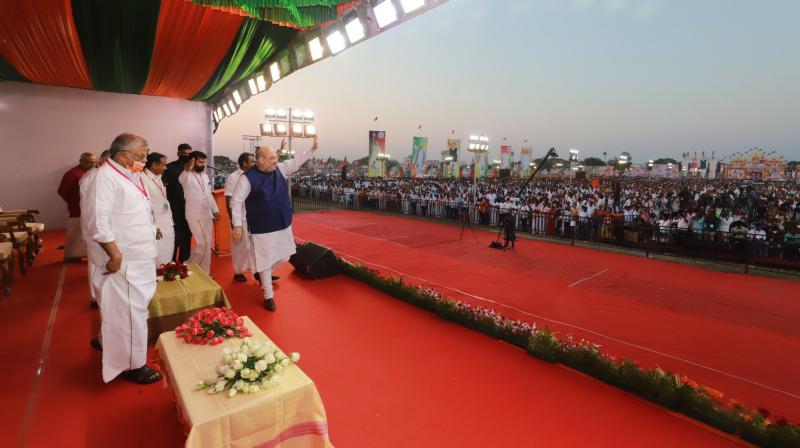 Chennai/Karaikal: The seat-sharing alliance talks between senior BJP leader Amit Shah and Edappadi Palaniswami and O. Panneerselvam of the AIADMK began late on Sunday night. Due to meet on Saturday night at a Chennai hotel, Mr Shah’s arrival past midnight as well as his tight schedule on Sunday, involving a meeting with Tamil Nadu BJP leaders and then a whistlestop campaign tour of Karaikal and Villupuram meant that the leaders had to wait till late night to start discussions towards sealing the deal.

The indications are that the Tamil Nadu ruling party was driving a hard bargain in offering up to 21 seats for the BJP in its alliance, retaining the PMK as its major ally. The party has already parted with 23 seats for the PMK and might have to spare a few more for ally DMDK, with whom the talks began on Sunday night at minister P. Thangamani’s house. An announcement on the deal is expected only on Monday.

The BJP, which is focusing on the NDA alliance in Puducherry with N. Rangasamy’s AINRC and the AIAMDK, where pre-poll surveys hint at good prospects, might settle for a smaller share of seats in the bigger Tamil Nadu Assembly. It appears that the Union territory is where the BJP’s best chance of a breakthrough in South India lies.

Having won the 2016 Tamil Nadu polls while going it virtually alone but under the stewardship of the charismatic J. Jayalalithaa, the AIADMK might have been able to convince its allies that reserving a lion’s share of seats for the party alone could increase the chances of the alliance at the polls. But early surveys are tilted towards the DMK-Congress combine.

The DMK-Congress talks are due to begin soon. The DMK is said to have fed the same logic for limiting the Congress to less than 25 seats in the alliance. The Dravidian majors have reasons to view the polls as a straight fight, with concessions to allies granted only for the purpose of keeping old alliances going. The DMK was in talks with its ally IUML on Sunday night.

Meanwhile, while on active campaign mode after leaving Chennai for Karaikal in Puducherry on Sunday morning, Mr Shah took aim at the Congress, lambasting its erstwhile rule in the Union territory. He accused former chief minister V. Narayanasamy of giving “cut money to the Gandhi family” from out of the Rs 15,000 crore Central funds.

The home minister said the Congress government which collapsed after losing its majority had indulged in petty politics over Central schemes meant for the people of Puducherry.  Hitting out at Mr Narayanasamy for blaming the BJP for the fall of his government, Mr Shah said many senior leaders were leaving the Congress “because it is collapsing across the country due to dynasty politics”.

During his speech, Mr Shah had time to aim his barbs at his pet target Rahul Gandhi. Mr Shah took an elaborate swipe at him, mocking him for saying there was no “dedicated” fisheries ministry at the Centre, pointing out that Prime Minister Narendra Modi had set one up two years ago.

“Rahul Gandhi said a few days ago here: ‘Why has the Modi government not created a separate department for fishermen?’ Narendra Modiji has already worked to form a separate ministry for fishermen... Rahul bhaiyya … you were on leave, so you are not aware,” Mr Shah said, to rub it into the former Congress president.

The “you were on leave” swipe was aimed at Rahul Gandhi’s frequent foreign trips abroad, which give endless ammunition to the BJP. “I want to ask the people of Puducherry... the party whose leader has been in the Lok Sabha for four terms … does not know that the fisheries department started in the country two years ago. Can that party take care of the welfare of Puducherry?” he wondered.